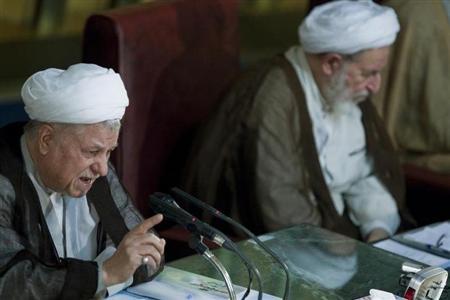 In Iran, opponents use age to attack Rafsanjani campaign 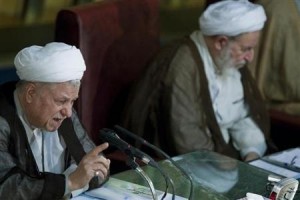 TEHRAN — In a political order where elderly men have long been considered the most fit leaders, Ali Akbar Hashemi Rafsanjani’s age — 78 — is the latest reason his detractors say he should not be allowed to run for president of Iran.

Since entering the race to replace Mahmoud Ahmadinejad on May 11, the two-term former president and founding member of the Islamic Republic has been the target of a focused campaign of criticism by Iran’s conservative establishment that considers him a threat to its continued influence.

A list of approved candidates was scheduled to be announced on Thursday by the Guardian Council, a 12-member body tasked with vetting presidential hopefuls. The announcement was delayed by five days, however, because deliberations over the qualifications of the nearly 700 candidates who registered were taking longer than anticipated.

Regardless of his age, Rafsanjani’s last-minute candidacy has sparked interest in the election, which otherwise was expected to draw candidates only from the conservative camp ideologically aligned with Iran’s supreme leader, Ayatollah Ali Khamenei.

“Conservatives had been very comfortable with their prospects before Rafsanjani entered the race,” said one local analyst who, like others interviewed for this article, declined to give his name because of the sensitivity of the election. “They face a major challenge since they know his presence will attract voters to the ballot box, and likely not in their favor.”

His conservative critics deem Rafsanjani a “financially corrupt and culturally far too liberal element of the elite,” said Rouzbeh Parsi, a senior analyst at the European Union Institute for Security Studies who specializes in Iran.

“A young nation will not elect an 80-year-old man,” ultra-conservative candidate Kamran Bagheri Lankarani said in a domestic news interview on Saturday. Former parliament speaker Haddad Adel, also a candidate, said Rafsanjani “does not have energy to run the country.”

Previous attacks focused on Rafsanjani’s political record, charges of corruption, his vast fortune and most intensely on what critics say was his support for the 2009 post-election protest movement.

Rafsanjani has avoided the fate of the two men he supported, Mehdi Karoubi and Mir Hossein Mousavi, both of whom have been under house arrest since 2011, but conservatives have renewed their accusations that he incited “seditionists.”

“In the 2009 sedition some wanted to eliminate this system,” he said. “Anyone who wants to become president must clarify his position about this act of sedition.”

Earlier in the week, a letter signed by 7,000 legal and education professionals urged Jannati to “disqualify active individuals in past years, especially in 2009 post-election unrests, for deviations from the ‘direct path of the Revolution’ without considerations of name and title.” The reference is to Rafsanjani and Ahmadinejad’s top aide, Esfandiar Rahim Mashaei.

That was followed by another letter, this one from 100 conservative lawmakers, that also asked the Guardian Council to disqualify Rafsanjani.

Conservative attempts to discredit Rafsanjani, however, have not slowed his support from the public or prominent moderates in government and even some conservatives.

“They have also realized that foreign policy adventures can lead to economic hardship and they believe that Rafsanjani can help resolve the foreign policy crises that Ahmadinejad has produced,” said Bijan Khajebour, managing partner of the Vienna-based consultancy, Atieh International.

Many Iranians, however, say they will not vote, as they still believe the 2009 election results were tainted.

“I asked my colleagues who they would vote for, thinking they would all say Rafsanjani,” said Hossein, a 29-year-old Web designer for an advertising agency in Tehran, who did not want to reveal his full name. “They looked at me like I was crazy. Not one of them said they planned on voting.”

But some analysts here say the Rafsanjani candidacy could change their minds.

“I think Hashemi [Rafsanjani’s] presence will add to the excitement of election and is very important,” Assadollah Badamchian, a member of the conservative Islamic Coalition Party, told the Iranian Labor News Agency on Friday. “Those who would not have voted will now take part in the election.”