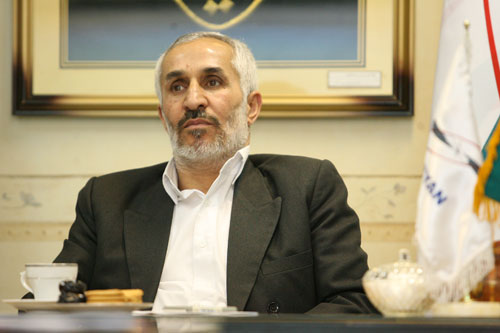 Wait, Mahmoud Ahmadinejad’s brother is running for president of Iran?

So which relative will Iran’s president support? It’s pretty clear Mashaei is getting the nod. For months, analysts have asserted that Ahmadinejad is grooming Mashaei, his current chief of staff, to be his successor, and Ahmadinejad confirmed these suspicions shortly after Mashaei announced his intention to run. “Mashaei means Ahmadinejad, and Ahmadinejad means Mashaei,” the president declared. So much for brotherly love. Iran’s election officials, in fact, have threatened to bring charges against Ahmadinejad (ones that could carry jail time or 74 lashes) for accompanying Mashaei as he registered for the election.

Davood, meanwhile, has announced that he will be running as an independent candidate, according to Iran’s state-run Fars News Agency. We know little about his ideology and background, but we do know that in recent months he has been a vocal critic of his brother’s administration, joining the president’s hard-line opponents in referring to members of Ahmadinejad’s team as a “deviant current” in Iranian society. 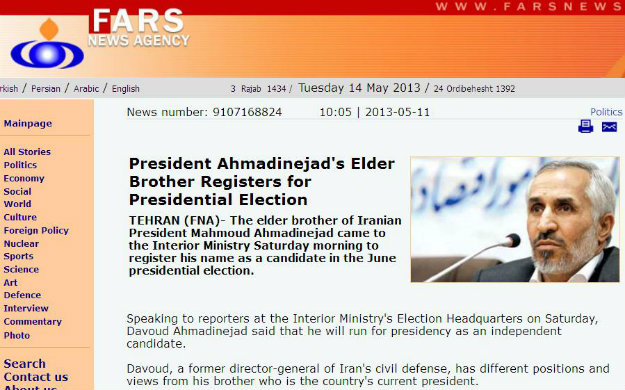 But the Ahmadinejad brothers haven’t always been rivals; once upon a time, not long ago, the two were actually political allies. During Ahmadinejad’s first term in office, which began in 2005, Davood served in his administration as the chief of the president’s office of inspection. It was only in 2008 that they split ways. In a 2011 interview excerpted by PBS’s Tehran Bureau, Davood claimed the separation was an ideological one:

We have separated our ways from those who have deviated from the path of Velaayat-e Faghih [guardianship of the Islamic jurist, represented by Supreme Leader Ayatollah Ali Khamenei], even if it is our brother [who has done so].

According to a leaked 2010 U.S. embassy cable, however, the falling out was a bit more personal than Davood let on. And it may have centered on an individual in the news again this week: Ahmadinejad’s confidant, Mashaei. As the cable explains:

Ahmadinejad’s brother Davud, the former head of the president’s office of inspection, accused Mashaei of saying ‘absurd’ things to keep the system busy and to prevent progress towards Khomeini’s goals. He mockingly implied that Mashaei’s only ‘accomplishment’ is his friendship with Hooshang Amir Ahmadi.

The mention of Hooshang Amirahmadi, a New Jersey-based professor and current presidential hopeful (see Katie Cella’s profile of him for FP), is surprising. But what U.S. diplomats said next is more telling:

(COMMENT: Davud Ahmadinejad, who resigned his position as in August 2008, reportedly did so due to disagreements with his brother regarding Mashaei. END COMMENT.)

With Iran’s Guardian Council now set to narrow down hundreds of presidential candidates to just a few names by May 17, analysts are predicting that Mashaei is unlikely to make the cut because of opposition from the supreme leader and his conservative backers. Davood probably won’t make it through either. But if he somehow does, and he wins, don’t expect Mahmoud to land a job in the new administration.