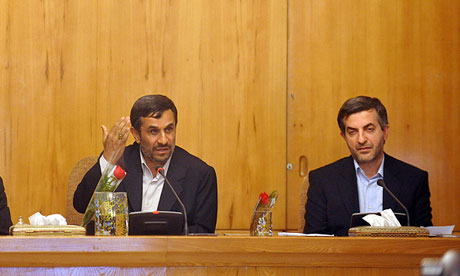 What just happened in Iran? 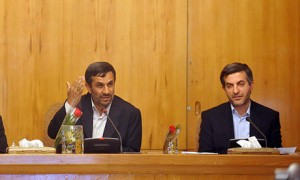 Iran’s President Mahmoud Ahmadinejad, centre, with his chief of staff, Esfandiar Rahim Mashaei, right, in a cabinet meeting in Tehran.

Farideh Farhi has done her usual excellent job of unwrapping the Iranian internal political scene. I very much share her surprise about this weekend’s events.

I thought that the Supreme Leader had decided unequivocally that there was to be no repetition of 2009, i.e. no credible individuals challenging the existing system and no mobs in the street with grievances after the vote. He had even talked about eliminating the presidency entirely, in favor of a parliamentary system.

So what has happened?

Hashemi Rafsanjani and Esfandiar Rahim Mashaie (among others) must have believed that Ali Khamenei: (1) acquiesced in their candidacy; or (2) could not prevent it; or (3) was essentially irrelevant. Whatever the rationale, their decision to proceed with their candidacy implies that Khamenei was either unable or unwilling to exercise control of the process or that his objectives were quite different from what we had understood from his observable actions and words.

At a minimum, these candidates were willing to put Khamenei in an embarrassing position by publicly ignoring his well-known preferences, apparently without concern for the consequences.

Of course, it is still possible that the Guardian Council will simply disqualify all but the “safe” candidates, despite the past history of leaders like Rafsanjani and their intimate association with both the Leader and the revolution. That would confirm the cynical interpretation of Iran’s leadership after 2009 — that it realized the revolution was dead and there was no need to pretend that it was about anything other than raw power. That would be the counterpart of the Soviet Union in the 1930s when Joseph Stalin killed off his fellow revolutionaries and simply seized power.

But if that was his intent, why permit these troublesome characters to register at all? Could Khamenei not tell Rafsanjani simply to stay out of the race (the story is that he gave an ambiguous response to Rafsanjani’s query)? And how about all those obvious Khamenei supporters? Why not designate one of them to carry the banner and let the others know that they were not welcome? For those who believe that he didn’t care because he can easily jigger the voting system, I draw attention to the fact that the president of Iran has a horse in this race and that he has unequaled access to the voting process. He could make 2009 look like a picnic.

At this point, the most likely interpretation is that each of the candidates was in it for himself, and the Supreme Leader had very little to say about it. The notion that the Supreme Leader is far less supreme than his clique would pretend is neither new nor surprising. But this apparent evidence that he is not only lacking in political clout but is in fact essentially irrelevant to the decision-making process is something new — especially if this plethora of candidates risks another train wreck of the magnitude of 2009.