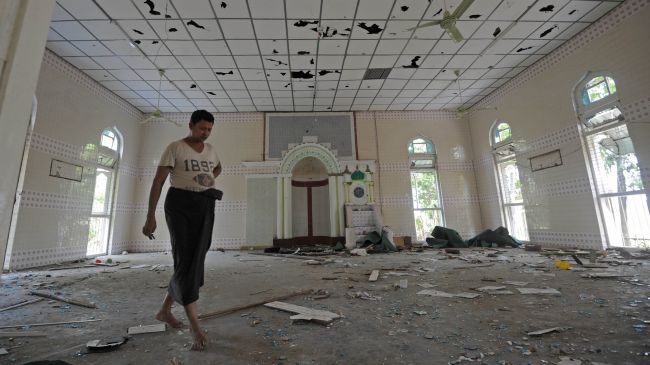 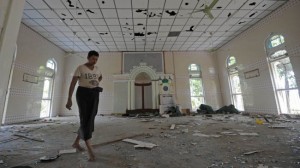 This picture shows a mosque destroyed after hundreds of extremist Buddhists armed with bricks stormed a group of Muslim villages in Okkan in Myanmar on Wednesday, May 1, 2013.

Iran’s Foreign Ministry has denounced the recent attack by extremists on Muslims in the city of Okkan in Myanmar that led to the destruction of the community’s houses and holy sites.

Hundreds of extremist Buddhists armed with bricks stormed a group of Muslim villages in Okkan, about 70 miles (110 kilometers) north of Yangon, on Wednesday. The Buddhist mob targeted Muslim shops and destroyed at least two mosques that left one man dead and ten others injured.

Iran’s Foreign Ministry Spokesman Ramin Mehmanparast said the clashes in Myanmar would lacerate the feelings of the people in the Islamic world and put at stake the achievements made through political and economic reforms in the country.

He lamented the destruction of the holy sites as well as threats against Muslims’ lives, and expressed deep concern over the continuation of such inhumane acts in Myanmar.

The Iranian official underlined the need to take firm action against the perpetrators of the incident.

He also expressed hope that Myanmar’s government would cooperate with the Organization of Islamic Cooperation (OIC) and its Contact Group to prevent the repetition of extremist acts and systematic clashes in the country.

Rohingya Muslims are facing torture, neglect, and repression in Myanmar.

Hundreds of Rohingyas are believed to have been killed and thousands displaced in recent attacks by extremist Buddhists.

Myanmar’s government has been accused of failing to protect the Muslim minority.