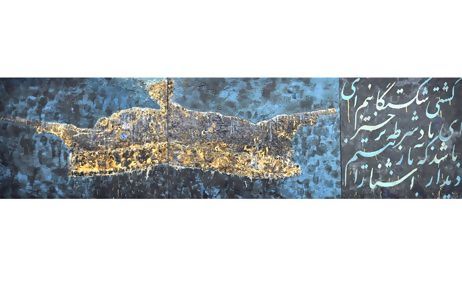 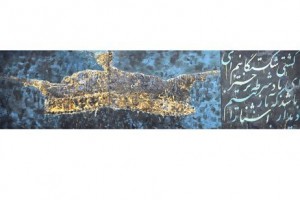 In Titanic 1979, Reza Derakhshani says, a crown in a sea of blue and poetry by Hafiz represent the sinking of culture, dynasties and civilisation.

If you want a reason to visit Reza Derakhshani’s solo show at Salsali Private Museum, the fact that the main installation has completely changed since it was unveiled during Art Week is a good one.

The black-sand snakes that the artist shaped with a common house brush before the opening in March have been swept away and replaced with skulls that lie at the base of the tomb of Cyrus the Great, the founder of the Persian Empire. The area has also been curtained off and filled with black light. To see the glowing shape of Pasargadae, you must peek through cut-out eyeholes. Its dynamism, colour and theme summarise the exhibition.

The exhibit was originally planned as a retrospective show, but Derakhshani was not content with something so static, so he took his old paintings, characterised by vivid colours and Persian iconography, and created new ones. The mostly monochrome and muted tones illustrate dark internal processes that stem from the destruction Derakhshani is witnessing in his homeland.

“Being sensitive, you cannot escape it,” he says in a slow and thoughtful manner that reflects his pensive creativity. “I’m not into political slogans but to a certain point I don’t mind if it is expressed it in a poetic way.”

Cyrus’s tomb, then, really holds the heart of the show, because, if there is one subject that comes across during a conversation with Derakhshani more than any other, it is a deep sadness at the loss of Iran’s magnificent past.

“Iran wasn’t always what it is today,” he says. “It was 3,000 years ago when our leader spoke about human rights and freedom of religion and even now the United Nations use … [this] as an example of the rights of nations. I do get really sad, especially because many Iranians don’t even realise what has been destroyed, so how can I not paint about it?”

The same feelings are echoed in the giant Titanic 1979, a textured triptych painting of a crown drowning in a sea of blue and flanked by the poetry of Hafiz. It is not the ship that is sinking but culture, dynasties and civilisation, Derakhshani explains.

Untitled 2013 hangs in the same room. If inconspicuous in its title and size, it certainly hasn’t gone unnoticed by the crowds. Derakhshani added the canvas, an old Persian rug mounted on a board and painted over to form new patterns, the night before the exhibition opened. It was a last-minute but well executed decision; the British Museum in London wants to buy it and is wrangling over sales terms with Ramin Salsali, the owner of the museum and the collection.

Only a few weeks ago, Salsali was having similar conversations with New York’s Metropolitan Museum of Art. The Met closed a deal to buy Shattered Music just before Art Dubai in March.

Of course such accolades make Derakhshani proud, but mostly because his work is of high enough quality to hang in a museum, he says. Sales do not drive his passion, he says, but rather the hope that with each new creation he might influence some sort of change. “I don’t believe in revolutions anymore,” he laughs, but he does hope to stir up some memories.

Iranian or not, the works in the second room – The Rose and the Blackbird, Tree of Life, Nuclear Left, Nuclear Right and In & Out – awaken simple human emotions. A nuclear explosion in vibrant pinks and purples hangs next to a painting of crows and gold using volcanic sand and, in the corner, a four-metre square plastic sheet bears a large gold disc with a skull in the centre.

Look a little longer and the skull is lying in the map of Iran and the images of the birds are repeated. Although initially detached, the works are linked, and, as with all his work, there is a deep underlying thread.

Upstairs, there is his photographic series of Iranian women and, in Salsali’s office, another rug painting lies on the floor. “We are more than happy to have people wander in to the offices as well,” says Alicia Hughes, the collections manager. “We are a museum and we want people to enjoy the work.”