Israel will be ‘wiped out’ if it attacks Hezbollah, Iran says 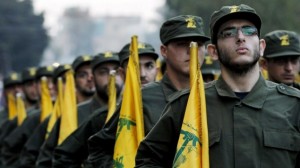 Hezbollah fighters hold party flags during a parade in a southern suburb of Beirut, Lebanon.

A top general in the Iranian Revolutionary Guards Corps on Sunday warned Israel that any military action against Lebanon and the Hezbollah terror group would result in Israel’s destruction.

In an address in the southwestern Iranian city of Shahrekord, Brigadier General Mohammad Hossein Sepehr claimed that Iran now extends all the way to the Mediterranean coast, presumably an allusion to Tehran’s influence in Lebanon and Syria via its proxy Hezbollah.

The semi-official FARS news agency quoted Sepehr as saying that Hezbollah’s sizable stockpile of rockets can overcome Israel’s Iron Dome missile defense system, and if Israel and Hezbollah engage in war, “the resistance front will wipe out Israel.”

In recent weeks, the Israeli Air Force conducted a number of mock raids over southern parts of Lebanon. The low-altitude flights increased after a drone sent from Lebanon was shot down by an IAF F-16 Thursday some five miles off the coast of Haifa.

According to recent assessments among Israel’s political and security echelons, Iran’s Revolutionary Guard forces were directly behind the launch of the drone.

Israel initially maintained that Hezbollah had sent the drone.

The prime minister’s helicopter was forced to make an emergency landing as jets scrambled to identify and intercept the aircraft Thursday.

“I view with utmost gravity this attempt to violate our border. We will continue to do everything necessary to safeguard the security of Israel’s citizens,” Netanyahu said after the incident.

Deputy Defense Minister Danny Danon accused the Iranians of using Hezbollah to test Israel. “We’ll respond where we see fit, but there will be a response,” he said.