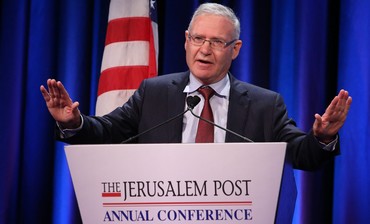 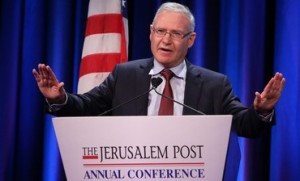 NEW YORK – The question of whether it is more dangerous to allow Iran to go nuclear or to launch a preventative military strike is the question of the day, former military intelligence chief Amos Yadlin told attendees at the 2013 Jerusalem Post Annual Conference in New York on Sunday.

Yadlin, who panned Prime Minister Binyamin Netanyahu’s insistence on putting down red lines for action on the Iranian issue, said more time must be granted for diplomacy and for sanctions to be imposed efficiently – with the only really effective sanctions having come into effect last year – before military action is considered.

It is not yet the right time for military action, Yadlin said, adding that in addition to diplomacy and economic measures, “we must give more time for the other strategies that nobody takes credit for,” an apparent reference to such clandestine modes of attack as assassinations and computer hacking.

Yadlin, who now directs the Institute for National Security Studies at Tel Aviv University, said, however, that if “worse comes to worse and all other options are exhausted [and are] not stopping Iran, the consequences of stopping them” will be less than those of allowing Tehran to go nuclear.

However, he said, the timing of any attack must be calibrated to make sure that Israel doesn’t “pay both prices,” that of the losses incurred in a military strike and a failure to prevent an Iranian nuclear breakout.

Israel, he said, must “be very careful,” but “it’s possible” to carry off a successful attack.

We are a “very strong country and we can cope with the consequences” of a military strike,” he added.

While saying that Israel could handle “the day after” such a strike, Yadlin added that the Jewish state requires the international community and “especially the United States for the decade after,” because they are necessary to prevent Iran from acquiring the bomb in the years after an Israelistrike.

Yadlin also called setting red lines “problematic,” saying “we should avoid them.” He expressed his belief that by announcing red lines, Israel is providing its enemies with the “possibility to maneuver” around them.

Speaking at a conference sponsored by the INSS last week, Yadlin stated that “If Iran continues to enrich uranium at its current rate, toward the end of the year it will cross the red line in a clear manner.”

Tuesday’s comments are in line with an assessment made by Yadlin in February, when he said that, at its current rate of uranium enrichment, the Islamic Republic would reach nuclear breakout capacity between June and August.

“Even though Iran is on the way to crossing the line of Netanyahu, that doesn’t mean that they have the bomb,” he told The Jerusalem Post on Sunday by way of clarification of his previous statements. “The bomb is 90 percent enriched uranium, Netanyahu puts the red line at 20%.”

“It will be much easier and quicker for them to reach 90%, because they have not – as previously thought – diverted their 20% enriched uranium to fuel rods that cannot be used for a bomb,” Yadlin said. “Instead, they have made them into oxidized uranium in powder form that can be reconstituted and shifted back to the military nuclear program.”