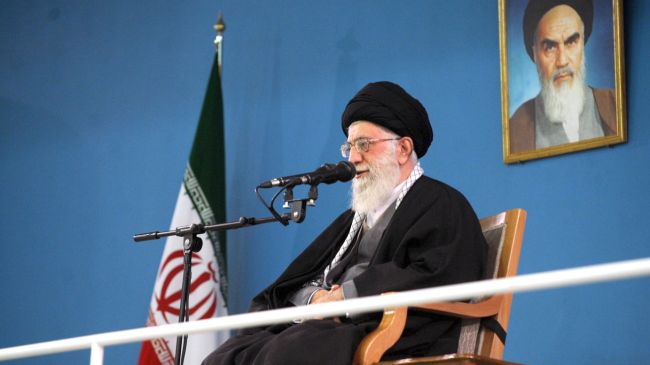 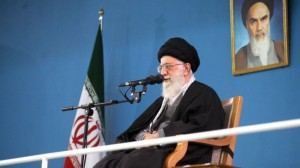 Leader of the Islamic Revolution Ayatollah Seyyed Ali Khamenei addresses thousands of workers in the capital, Tehran, on April 27, 2013.

Leader of the Islamic Revolution Ayatollah Seyyed Ali Khamenei says Iran needs to make a huge leap in the political and economic arenas, describing the election as an important issue and the manifestation of national might.

In an address to thousands of workers in Tehran on Saturday, Ayatollah Khamenei described the people’s conscious presence in the country’s politics and management as political valor.

“A clear example of political valor is the upcoming election, which…will take place at the scheduled time with the enthusiastic presence of the nation,” said the Leader.

The Leader said possible candidates must carefully assess their abilities and the executive position they are competing for.

“The country and the mighty and resistant nation of Iran need a president, who is brave and fearless in the international arena and in the face of arrogant powers and who has planning, wisdom, and foresight in the domestic arena and believes in the resistance economy….”

“The Iranian nation seeks to realize great objectives and [carry out] great tasks and is not one to surrender and no one can speak to it using the language of force. Therefore, the individual who heads the executive branch [of government] must be brave, fearless and resistant against enemy pressure and should not back down.”

The Leader said the ill-wishers of the Iranian nation plot to prevent economic and political valor in Iran, adding, “They try to use economic pressure to create a rift between the nation and the Islamic establishment and dishearten the people.”

The Leader, however, stressed that the resolve of the nation and officials would ultimately disappoint the enemy.

Iran’s 11th presidential election will be held on June 14. The president of Iran is elected for a four-year term in a national election after the Guardian Council vets the candidates for qualifications.

Regarding the economic situation in the US and Europe, the Leader said the capitalist economy has proven to be inefficient.

“Current events in Europe and the US are just the beginning, and conditions will become much more worse because the capitalist economy is headed towards collapse.”

The Leader said that the existing economic, ethical and cultural problems in the West all contribute to the decline of the Western civilization.