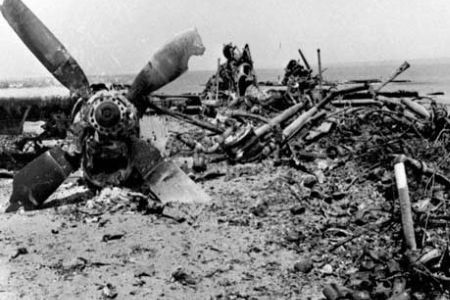 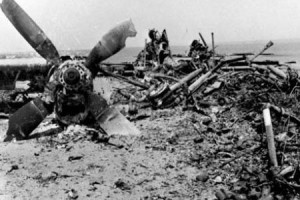 US helicopters involved in Operation Eagle Claw in central Iran back in 1980 were hit by a sandstorm and crashed.

Iran has marked the 33rd anniversary of a failed US military operation on the Iranian soil which aimed to release the US Embassy staff held in Tehran after the 1979 Islamic Revolution.

On Thursday, hundreds of Iranians from the city of Tabas and other neighboring cities gathered at a mosque for an annual commemoration ceremony.

A number of local officials and religious figures were also among the participants, who chanted anti-US slogans during the event.

On April 25, 1980, the United States launched a covert military operation, known as Operation Eagle Claw, in an attempt to airlift the US Embassy staff held in the Iranian capital, Tehran.

However, a sandstorm hit and brought down the group of US military aircraft in the Tabas desert, killing eight American servicemen and leaving the mission aborted. Inspections showed a helicopter crashed into a C-130 Hercules transport plane as five other choppers were stranded in the storm.

The units involved in the operation were the US Air Force, Army, Navy and Marine Corps.

During the Thursday ceremony, the wreckage of the American planes and helicopters, which had been ruined in the sandstorm, were also put on display.

The Tabas incident occurred during the administration of former US President Jimmy Carter and many believe it played a major role in Carter’s defeat in the 1980 presidential election.

Iran commemorates the event every year as a symbol of the failure of the United States.