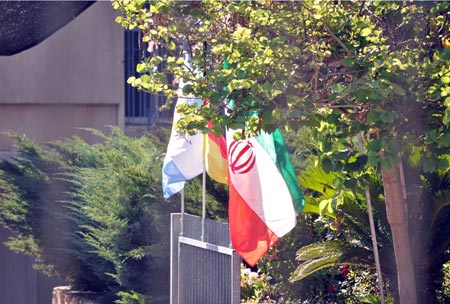 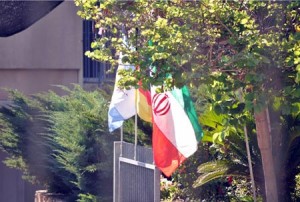 KATMANDU, Nepal (AP) — An Iranian man using a fake Israeli passport is being questioned in Nepal after being arrested outside the Israeli embassy, police said.

The man was arrested last week after Israeli embassy officials told them that a suspicious man appeared to be scouting the embassy in the upscale Lazimpat neighborhood in Katmandu, said Kesh Bahadur Shahi of Nepal’s Central Investigation Bureau.

He said Wednesday that the man identified only as Mohsin Khosravian is being held in a detention center in Katmandu. Police said they could not give any more details as the case is a sensitive diplomatic issue and still being investigated.

Several attacks and plots around the world in recent years are believed to be linked to a covert war between Israel and Hezbollah and the militant group’s patron, Iran.

A car bombing in 2008 in Syria that killed Hezbollah’s top military commander was widely thought to be the work of Israeli agents.

Hezbollah is thought to be responsible for a bus bombing in Bulgaria last year that killed five Israeli tourists and their Bulgarian driver, as well as attempts to bomb Israeli diplomats in Thailand, India and Georgia.

In the Bangkok case, three Iranians were detained, including one who blew off his legs when a device exploded. In the New Delhi case, a journalist who worked for an Iranian news organization was accused of bombing a diplomatic car, injuring a passenger.