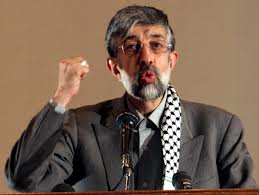 Iranian presidential hopeful Gholam-Ali Haddad-Adel has dismissed remarks about the Coalition of Three’s defeat in the upcoming election.

Haddad-Adel, who is a former Majlis Speaker, a current lawmaker, and a member of the Coalition of Three, said Wednesday that such baseless rumors are spread by those who feel endangered by this coalition.

He added that the Coalition of Three is not a threat to the Principlists camp, but also a means to establish unity among them.

Haddad-Adel, who is also a member of the Academy of the Persian Language and Literature, further said that the Coalition has yet to decide on holding an opinion poll to choose its final presidential nominee.

The coalition is to pick one of its members with the highest approval rating as the candidate to succeed President Mahmoud Ahmadinejad.

The president of Iran is elected for a four-year term in a national election and nominees must be vetted for qualifications by the Guardian Council.