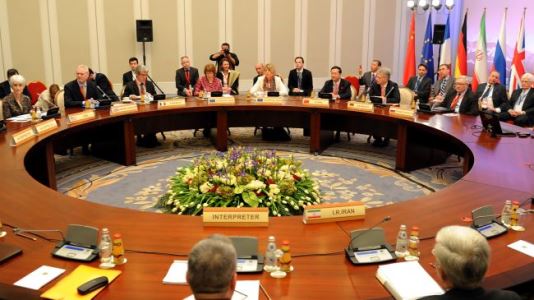 Debating next steps on Iran 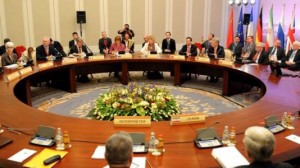 The failure of the latest round of negotiations over Iran’s nuclear program will likely bring calls for changes in the American approach — for bilateral engagement, for an “endgame proposal,” or even for reconsideration of the merits of “containment” of a nuclear-weapons-capable Iran. One such proposal — focusing on strengthening the US “diplomatic track” with Iran — was put forward recently by The Iran Project, a group of distinguished former U.S. officials.

There is much in the report with which I agree. In particular, the report is correct to observe that neither sanctions nor engagement alone will accomplish U.S. aims and that a combination of policy tools will be required. It is also right to begin with an assessment of U.S. and Iranian interests and objectives, which should be the starting point for any successful policy.

However, I would differ with the report on four vital issues and thus reach different conclusions regarding the way forward on Iran policy.

First, the report conflates the objectives and interests of Iran writ large with those of the Iranian regime. The principal-agent problem that bedevils even democratic governments is particularly pronounced in authoritarian regimes, such as Iran’s, which are not accountable to an electorate. Care must therefore be taken to distinguish between Iranian national interests and regime interests.

When it comes to sanctions, the Iran Project report’s own conclusions illustrate this distinction — the economic costs imposed upon Iran have certainly set back Iran’s national interests but have had little apparent impact on the regime’s own calculus, likely in part because Iran’s leaders are relatively sheltered from the impact of sanctions compared to ordinary Iranians.

This distinction must also, however, be applied when designing incentives. What the report lists as Iranian aims — respect, acknowledgement of nuclear “rights,” etc. — appears based on the rhetoric of regime officials. That rhetoric has multiple audiences in mind — especially public opinion in Iran and the Middle East — and therefore deliberately obscures the gap between the interests of the regime and those audiences. An examination of Iran’s policies and actions, on the other hand, suggests that the regime is primarily interested in the enrichment of regime elites, the projection of power throughout the region to ward off potential foes, and especially in the survival of its “velayat e-faqih” system of rule.

Second, the report draws a false distinction between “diplomacy” and “pressure.” There is a widespread misconception that diplomacy means “being nice,” which leads to engagement being seen as a reward. In fact, diplomacy is just the conduct of relations between states — a means of communication. A skilled diplomat will use these communications both to pressure and to entice, as well as to learn about his counterpart. Whether any particular action constitutes a disincentive or incentive depends on whether it damages or advances the Iranian regime’s interests, which is why understanding how the regime truly views its interests is critical to diplomatic success.

Third, the report treats Iran’s nuclear ambitions as the result of U.S.-Iran hostility. In reality, both likely arise from the regime’s desire to preserve itself. Anti-Americanism was a founding pillar of the current Iranian government, and abandoning it would undermine the regime’s raison d’etre. As for nuclear weapons, they would under the right conditions provide Iran with a powerful deterrent to external attack. Furthermore, the regime may calculate — based on U.S. policy toward North Korea during its recent leadership transition, as well as U.S. policy toward Pakistan — that fears of “loose nukes” would cause outside powers not simply to be deterred, but give them a vested interest in the regime’s stability. Because the threats to that stability emanate from within as well as without, Western security guarantees are unlikely to be regarded as an acceptable substitute for a nuclear arsenal.

Fourth, and most problematically, the report assumes that a nuclear agreement could result in a broader strategic shift by Iran. In fact, a nuclear agreement — and any improvement in U.S.-Iran relations — is more likely to be a consequence of such a shift than a cause of one. As noted above, both Iran’s nuclear ambitions and its hostility toward the West are elements of a strategy to advance the regime’s interests, as it conceives them. For a strategic shift to occur, the regime must be convinced that this strategy is no longer tenable.

Far from compelling the regime to rethink its strategy, however, the current Western approach is likely seen in Tehran as vindicating it. U.S. policies at the negotiating table and across the region — a reduction in our military posture, our inaction in Syria, and our continually improving nuclear offers — are interpreted as successes by the regime and perceived by it as indications not of good will but of desperation or decline.

Seen in this light, rather than forcing the regime to face a stark choice, the U.S. and our allies have given Iran’s leaders the impression that they can have their cake and eat it too: retain an implicitly acknowledged nuclear weapons capability and not only maintain but expand its regional influence without having to adopt a posture of international cooperation.

The U.S. objective, therefore, should be to reverse this dynamic. Such an approach would require a firmer posture in the nuclear arena — refraining from further improvements to our offer, setting red lines for Iran’s nuclear program, taking  steps to enhance the credibility of the U.S. military threat, and leaving open for now the question of whether we will hold further talks.

But it would also require putting the nuclear negotiations in their appropriate regional and strategic context. The regime should come to believe that a confrontational, rather than cooperative, approach to its own security will come at a price, exacted by the U.S. and our allies. There are a number of ways to send this message — pushing back against Iranian support for terrorism, greater support for the Iranian opposition — but the most important way to do so is through greater involvement in Syria, where Iran has much at stake.

None of these steps exclude continued or even intensified diplomacy. Successful policies should combine a range of tools employed in coordination. But the goal of all of these actions should be the same. A strategic shift by Iran — from a zero-sum policy of confrontation to one of cooperation — would benefit the U.S. and the region whether or not a formal nuclear agreement is reached. A nuclear agreement without such a shift, however, will prove a hollow achievement.