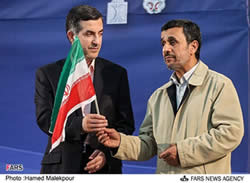 Spotlight on Iran – Elections 2013: president’s supporters step up their activity ahead of the elections, prepare for massive show of strength

Elections 2013: president’s supporters step up their activity ahead of the elections, prepare for massive show of strength

As the political arena is gearing up for presidential elections slated for June 14, the president’s supporters are intensifying their activity and preparing to hold their first significant show of strength. Next week (most likely on Wednesday, April 17) the government is planning to hold a mass event that will be attended by about 100,000 people at Tehran’s Azadi Stadium. Officially, the event, which is going to be presided over by Ahmadinejad, is being held as a show of appreciation for government committee members who helped organize the president’s trips to Iran’s various provinces for the past several years. The government’s critics, on the other hand, are saying that the event is “the first election rally of the deviant faction” (a term used to refer to the president’s supporters and his controversial ally Rahim Masha’i), arguing that the president intends to take advantage of it to advance Masha’i’s possible candidacy ahead of the elections.

Entekhab, a website affiliated with the pragmatic wing of the conservative right, reported last week that, for the past several weeks, the government has been putting unprecedented efforts into organizing the event, and that it even intends to pay those citizens who will take part in it. Mohammad Sharif Malekzadeh, Ahmadinejad’s vice president and head of the Cultural Heritage and Tourism Organization, said that the event will feature performances by traditional music groups representing Iran’s various ethnicities. According to the report posted on Entekhab, Ahmadinejad and Masha’i will once again repeat the slogan “Viva Spring”, which has become the election slogan of government supporters, as well as nationalistic calls that reflect the ideological views of the “deviant faction”, whose representatives tend to put an emphasis on the national and cultural elements in the Iranian identity (http://www.entekhab.ir/fa/news/104116). This weekend the Raja News website reported that the event will be held on Thursday, April 18, and that it will be attended by tens of thousands of people employed in government ministries and organizations. The website estimated the cost of the event at over 800 million tomans (Raja News, April 12).

In recent days a number of Facebook pages affiliated with Rahim Masha’i have called on his supporters to come to the gathering at the Azadi Stadium. This call received mixed reactions from web users. Some of them asked for more information on the event and expressed their support for Masha’i, while others expressed their opposition to Ahmadinejad’s ally and even posted curses against him. In recent weeks Masha’i’s supporters have stepped up their activity on social networks and so far created dozens of Facebook pages affiliated with him (see Appendix for details). While many of the pages have a small number of followers (from just a few to several dozens), the fact that there are so many pages is evidence of the intensive activity conducted by Masha’i’s supporters on social networks (apparently both in Iran and also among Iranian exiles), particularly when compared to the activity of other potential candidates who might run in the presidential elections.

The event scheduled to take place at the Azadi Stadium is drawing strong criticism from the president’s critics. Majles member Mohammad Hassan Asfari said that the planned gathering is illegal and that it “smells like elections”. In a press interview, Asfari said that this is a case where public resources and government budgets are being exploited for election purposes, and that if the gathering is held as planned, the Majles will launch an investigation into its funding sources and objectives. Asfari noted that the government members would have been better advised to spend their time looking for a solution to the economic problems facing the country instead of holding such gatherings, which are of no use whatsoever to the public (http://www.yjc.ir/fa/news/4335622).

Majles member Hojjat-ol-Eslam Ahmad Salek Kashani also discussed the planned event, and called on the Guardian Council to intervene in the matter on the grounds that taking advantage of public funds for personal and partisan purposes is prohibited by law. Kashani, a Majles member for Esfahan Province, said that the government intends to present Masha’i as its candidate in the elections, that the “deviant faction” and the “seduction faction” (a term used to refer to the reformists) share common goals, and that the Guardian Council needs to fulfill its legal responsibility—that is, to disqualify those who represent these factions. Kashani also warned against having too many candidates representing the conservative camp in the elections, saying that it could weaken the conservatives, lead to a waste of votes, and intensity the internal differences of opinion in the conservative camp (Farda, April 12).

Avaz Heydarpour, member of the Majles National Security and Foreign Policy Committee, said that holding the gathering is a provocation against Supreme Leader Ali Khamenei, and warned the government against taking advantage of the country’s resources for the benefit of a “certain faction” that it supports. He argued that the exploitation of state budget for election propaganda is illegal. The Majles member noted that, according to his information, the government intends to close down education centers on the day of the event to attract students and thus increase the number of participants. In addition, the organizers of the gathering intend once again to use the election slogan of the “deviant faction”, which, according to Heydarpour, seeks to establish a government based on the Russian “Putin-Medvedev” model. The Majles member also spoke about the president’s new series of trips across Iran, accusing Ahmadinejad of taking advantage of his trips to Iran’s provinces for election propaganda. He stated that there is no reason to go on such trips when the current government’s term is coming to its end (Farda, April 9).

This week the president held a visit to Semnan Province in north Iran. In a speech given during the visit, whose participants included government members and Rahim Masha’i, Ahmadinejad accused his opponents of misrepresenting a statement made by the Supreme Leader about the elections. In a recent speech given on the occasion of the Iranian New Year, Khamenei said that he only has one vote and called for massive public participation in the elections. When the Supreme Leader clearly states that he only has one vote, Ahmadinejad said this week, it does not mean that he expresses his opinion for one candidate or against another. He stressed that the citizens themselves need to decide how they are going to vote (ISNA, April 11).

Last week, April 8, the daily Arman reported that Mohammad Reza Pour Ebrahimi, deputy chairman of the Majles Economic Committee, called on the Supreme National Security Council to cancel the planned gathering. However, the daily had doubts whether it will be possible to cancel the gathering such a short time before it is supposed to take place.

At the same time, high-ranking conservatives continue calling for the disqualification of any “deviant faction” members who may announce their candidacy for president. Ayatollah Abbas Ka’bi, member of the Assembly of Experts, said this week that the Guardian Council will not qualify “deviant faction” and reformist candidates. The top cleric warned that an “internal war” (fetneh) may re-erupt during the candidates vetting stage, and said that the security authorities are aware of such a possibility. He added that the enemies of Iran seek to take advantage of the election campaign to trigger yet another internal war, the way they did after the presidential elections in 2009, but that broad public participation in the elections can foil their schemes and guarantee the security of the country (Fars, April 11). Ayatollah Mohammad Mo’men, member of the Guardian Council, said at a meeting with leaders of the conservative Islamic Coalition party that if the council catches a “whiff of deviance” from any candidate, it will not hesitate to disqualify that person (Fars, April 12).