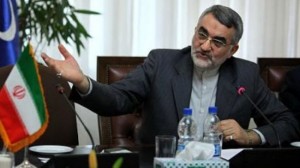 TEHRAN, Iran (AP) — A senior lawmaker says Iran will keep open the prospect of withdrawing from the Nuclear Nonproliferation Treaty and will seriously consider it if the West intensifies sanctions or refers the case to the U.N. Security Council.

Iran’s state TV Al-Alam website quoted Alaeddin Boroujerdi on Monday as saying that Iran cannot remain a treaty member at the same time it is being sanctioned.

Boroujerdi says Iran doesn’t want to build nuclear weapons, but that Tehran has every right to enrich uranium to any level it considers necessary.

Among other things, a group of six world powers wants Iran to stop its highest-level uranium enrichment.

Tehran says sanctions must be lifted and Iran’s right to enrich uranium has to be recognized in return for scaling back its enrichment activities.