Deep rifts exposed in latest round of Iran nuclear talks 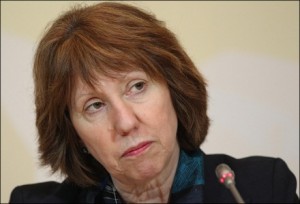 Two days of talks in Kazakhstan between Iran and six world powers illustrated the magnitude of the diplomatic challenge ahead.

Two days of Iran nuclear talks in Kazakhstan have exposed the depth of division and scale of mismatched expectations between Iran and six world powers, as they spar over ways to limit Iran’s most sensitive nuclear work.

The talks were unprecedented in both their intensity and depth, say officials from both sides, and even included a direct 30- to 40-minute exchange between the top American and top Iranian diplomats across the negotiating table.

Yet instead of narrowing a chasm that has bedeviled five rounds of talks in a year between Iran and the P5+1 group (the US, Russia, China, Britain, France, and Germany), this round appeared to illustrate like never before the magnitude of the diplomatic challenge ahead.

The P5+1 demands that Iran give up enriching uranium to 20 percent – a few technical steps away from bomb-grade – and disable one deeply buried facility, in exchange for a partial lifting of crippling sanctions. That proposal would be a first step toward a broader deal to ensure Iran will never make a nuclear bomb.

Iran says it needs to know that final deal will guarantee its “right” to enrich uranium for peaceful purposes and an end to sanctions; Iranian officials indicated that they counter-proposed exchanging 20 percent enrichment for a lifting of all unilateral sanctions.

That disconnect and “mutual misperceptions” now risk damaging the diplomatic process, says Ali Vaez, the senior Iran analyst for the International Crisis Group, who spoke to delegates on both sides at the talks in the Kazakh city of Almaty.

“The P5+1 expected instant gratification of its meaningful – but modest – offer of sanctions relief, while Iran saw an opportunity to devise a road map toward recognition of its rights to enrichment,” says Mr. Vaez.

Differences now remain “as wide as the distance between the first step and the end game,” says Vaez. “Still, there is a real cost in declaring failure and as prospects of a deal narrow, the temptation of more coercive alternatives grows. The ironic end result of years of mutual escalation is that both parties are now loathe to use the leverage they have sacrificed so much to acquire.”

Stern words were exchanged by diplomats in public, as each side sought to portray the other as needing to go home and recalibrate their thinking. No date was set for the next round of talks, but decisions on how to proceed could come within days.

“There may not have been a breakthrough, but there was also not a breakdown,” said a senior US official, who spoke on condition of anonymity.

“It is fair to say that Iran is only prepared to take very minimal steps with respect to constraints on its nuclear program while expecting very significant rewards in return [which is] not a realistic basis for progress,” said the US official. “This was such a detailed, such an intense, and such a complex 48 hours, we ourselves are just absorbing all that we heard and all that was discussed … we all really need to absorb and digest what we’ve heard.”

During the first day of talks, Iranian diplomats announced their need for an agreed framework on the “dimensions” and “final outcome” of the process before they could take initial steps, concerned that P5+1 demands could mount – including a requirement to stop all enrichment – with only marginal sanctions relief.

The current P5+1 offer, which has been seen by the Monitor, envisions Iran to eventually take unspecified “additional significant steps” before key sanctions could be lifted.

A Western diplomat said the P5+1 had been “somewhat puzzled” by the Iranian response.

Iran’s chief negotiator Saeed Jalili, told the Monitor in an interview after the Almaty talks that Iran had “always” told the P5+1 that such a framework agreement was necessary to “foster cooperation.”

“I like to think that we tried our very best to take as many questions as was possible to us,” Mr. Jalili told the Monitor. “We took a lot of time, taking those questions, providing responses, explaining our positions, our ideas, in great detail. This was so thorough that finally the members of [the P5+1] were asked, ‘Do you have any remaining questions?’ and nobody had any questions.”

Iran’s concluding statement used several positive phrases. Iran had put forward a “plan of action” that incorporated the P5+1 proposal, Jalili said, and he mentioned “forward movement” and that the “new conditions” of Iran’s initiative were meant to propel talks in a “constructive fashion.”

It was “now up to the P5+1 to demonstrate its willingness and sincerity to take proportionate confidence building steps,” said Jalili. “Creating confidence is a two-way street, and today after many measures taken by the Islamic Republic of Iran to provide additional confidence, now [the P5+1] must work to gain the confidence of the Iranian people.”

He said that enriching uranium up to 20 percent was the “right of the Iranian people,” but added – without being specific – that “this can be an issue to help create further confidence.”

The P5+1 saw Iran’s diplomatic moves in a very different and dimmer light.

“[Iran] responded to our proposal with some ideas that were a minimal response [that] not only had very, very tiny steps, in our view, but wanted a lot of return for those tiny steps,” said the senior US official. “The gulf between their current position and ours is quite great.”

Those differences were made clear in the long direct conversation (through interpreters) between Jalili and the head of the American delegation, US Undersecretary of State for Political Affairs Wendy Sherman. That was one of several, diplomats said, between Jalili and individual P5+1 negotiators.

Still, such unprecedented exchanges do not replace making progress on substantive issues, said the senior US official.

“We do see the world differently,” said the US official. “We come from different cultures, different backgrounds, and different ways of solving problems. And so it takes a lot of time to understand each other and to understand what each other is saying … the devil is truly in the details.”

Among those details are how to handle Iran’s growing stockpile of 20 percent enriched uranium. Iran says it needs it to fuel a research reactor in Tehran, and has converted some 40 percent of that stockpile into oxide for fuel use – rendering that portion virtually unusable for further enrichment to bomb-grade levels of 90 percent.

Past fuel swap deals have failed; the current P5+1 proposal would enable Iran to purchase that fuel and medical isotopes.

“What we are insisting on is our right to enrich,” Jalili told the Monitor. “This is equally true for 5 percent or 20 percent. You know well that 20 percent enriched uranium is used for medical purposes. One million Iranian patients are using these isotopes.”

Another hurdle was not overcome in Almaty. Several UN Security Council resolutions require Iran to halt all enrichment, at all levels, until it has resolved remaining questions about possible past weapons-related work with the UN’s International Atomic Energy Agency (IAEA).

Iranian officials say they reject nuclear weapons as un-Islamic, but also that they will never halt enrichment, which they consider an “inalienable right,” as a signatory to the Nuclear Non-Proliferation Treaty (NPT). That is why Iran says it wants to know now that it will still be able to enrich when the process is over, before any initial steps.

P5+1 officials themselves have variable interpretations, with Russia in the past stating that Iran should have that “right” to enrich recognized. Moscow called this round of talks in Almaty a “step forward.”

“What we are talking about is full compliance with the Security Council resolutions and [Iran’s] responsibilities under the NPT,” said the senior US official. “And we have always said that when they meet [those], then they can see their way to a truly peaceful, civil, nuclear program under the NPT, and all sanctions can be lifted. So there is no mystery here about what the end of the story is.”

That point in some ways returns the current diplomatic process full circle, to the earlier, maximalist proposals laid down by both sides last spring.

“The irony is that the more the two sides understand their respective positions, the more they realize how far apart and entrenched they are,” says Vaez, the ICG Iran analyst.

Still, P5+1 diplomats said they had never seen such an open exchange with Iran.

Catherine Ashton, the European Union foreign policy chief who leads negotiations on behalf of the P5+1, stated that the two sides remained “far apart on the substance” of the talks, but added: “For the first time that I’ve seen, [there was] a real back and forth between us, where we are able to discuss details, to pose questions, and to get answers directly.”

Iran-P5+1 nuke talks, Iran's nuclear program, P5+1 and Iran second meeting in Almaty, Quoted, result of second round of Iran and P5+1 in Almaty April 7, 2013
In Turkey, Kerry says door still open on Iran nuclear talks
Israel can only rely on self against Iran threat: PM