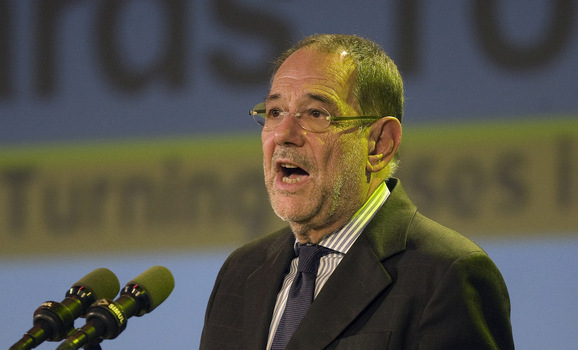 Solana: Syria war may be obstacle to Iran nuclear talks 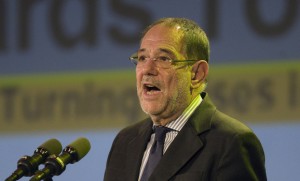 As the United States and its negotiating partners prepare to return to talks with Iran this weekend, the conflict in Syria may present a new obstacle to agreement, according to Javier Solana.

The former NATO secretary-general and foreign policy chief for the European Union told a Washington audience Monday [April 1] that “solving the [nuclear] problem will be very difficult” while fighting rages in Syria.

Solana, who headed nuclear talks with Iran from 2003-2009, noted Iran’s ties to the regime of Bashar al-Assad, which, Solana said, were closer than those between many NATO allies.

Solana also said that he worries about maintaining unity among the P5 (the five permanent members of the UN Security Council) if the nuclear talks do not make progress and the bloodshed in Syria continues.

“The P5 is together on one [the nuclear issue but] separated on the other [Syria],” Solana told the audience at the Brookings Institution.

A key member of the P5 — Russia — is on the same side as Iran in supporting the Syrian government.

Solana suggested that one reason the Obama administration has not intervened more forcefully in Syria is because of US concerns that that would jeopardize the nuclear talks with Iran.

“The US has not taken a more active role in Syria from the beginning to give them space to negotiate with Tehran,” Solana said.

No US official has explained Obama policy on Syria quite this way. Rather, US officials assert that more forceful steps – such as providing arms directly to the rebels or policing a no-fly zone – would escalate the fighting and make it more difficult to reach a political solution.

However, as the conflict drags on into its third year and the toll of dead and displaced rises, there have been reports that the United States is providing training to selected rebels in Jordan and that the CIA is coordinating arms shipments from Croatia to the Syrian opposition. US Arab allies such as Saudi Arabia, Qatar and the United Arab Emirates, have been openly arming the opposition.

The Obama administration has so far declined to engage Iran on a political solution to the Syrian crisis despite Iran’s formal offer to strengthen cooperation with the P5+1 on regional conflicts such as Syria and Bahrain, and Tehran’s leverage with Damascus, which exceeds even Moscow’s influence.

Gary Samore, former White House coordinator for arms control and weapons of mass destruction, said Monday that Iran might be more inclined to compromise on its nuclear program if the Assad regime falls, while giving no details of how or when that might happen.  The more Iranian Supreme Leader Ayatollah Ali Khamenei “feels isolated and threatened, the more likely he’ll make modest concessions,” speculated Samore, who appeared at the Brookings Institution along with Solana.

The key to an end to the fighting in Syria, Solana said, was buy-in from the Russians. He said he recently visited Moscow and met with Putin and worries that the US and Russia are growing more estranged despite US concessions to Russia on key issues such as missile defense.

“My fear is that it may be colder,” Solana said of the US-Russia relationship, and that this will undermine the unity of the P5 which, along with Germany, has been negotiating with Iran.

“The P5 has been a miracle,” Solana said. But “the level of constructive work together is diminishing.”