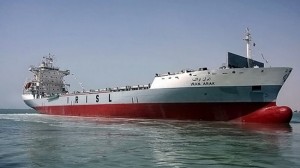 New Delhi: The joint venture between state-run Shipping Corporation and an Iranian company has been “dissolved” due to tightening of western sanctions, which impacted the company’s functioning.

“It (JV between Shipping Corp and Islamic Republic of Iran Shipping Lines) has been dissolved,” Minister of Information and Broadcasting Manish Tiwari told reporters here after a meeting of the Cabinet Committee on Economic Affairs.

Irano Hind Shipping Company, which was formed in 1975 by Iran’s former Shah Reza Pahlavi and the then Prime Minister Indira Gandhi as a bond of friendship, will be shut as it had failed to get business.

The shipping joint venture was among the few international ventures to survive the 1979 Islamic Revolution and decades of economic and diplomatic pressure from the West.

Irano Hind was, however, placed under UN sanctions in 2010 as US and its western allies pressured Tehran to halt its controversial nuclear programme.

This was followed by IRISL coming under sanctions for allegedly aiding Iranian nuclear programme.

The assets of the venture, which includes four crude oil tankers and four dry bulk carriers, are likely to be split between its promoters according to their shareholding.

The decision to wind up Irano Hind Shipping Co was taken in July last year.

The board of the company in July last year decided to dissolve the company, a decision which needed approval of the two governments and the United Nations.

India is one of the main targets of US attempts to chip away Iran’s critical commercial lifelines across Asia.

New Delhi has been forced to cut oil imports because of difficulties in payment as well as shipping of the oil.