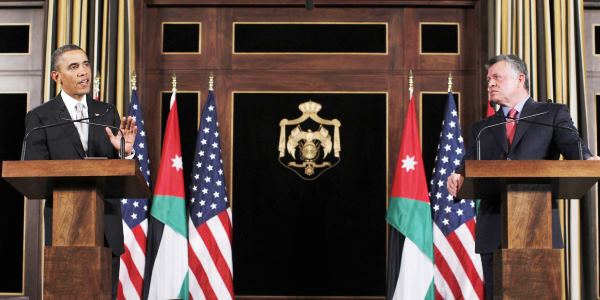 Obama: Iran has no interest In developing nuclear weapons 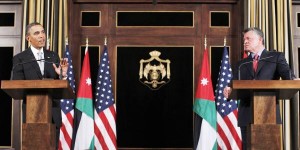 While answering a incitement question about ayatollah Khamenei’s speech about attacking Israel’s cities if Israel attack Iran, Obama said: as Iran’s supreme leader has said, developing a nuclear weapon would be un-Islamic and that Iran has no interest in developing nuclear weapons.

Obama said:  first of all, Jon, I’m not going to engage in a whole bunch of hypotheticals.  Because what I’ve said from the moment I came into office was that the best resolution of this situation is through diplomacy, and I continue to believe that.

We have organized the international community around a sanctions regime that is having an impact on Iran — not because we forced other countries to do it; because they recognize that if you trigger a nuclear arms race in this region, as volatile as it is, if you have the prospect of nuclear weapons getting into the hands of terrorists and extremists, that it’s not just Israel that’s threatened, it’s a whole range of people that could be threatened.

We’re talking right now about the possibility of Syria using chemical weapons.  What would be the conversation if Syria possessed nuclear weapons?

So this is not just a problem for Israel.  It’s not just a problem for the United States.  It’s a regional and worldwide problem.  And, by the way, we have been consistent in saying that nonproliferation is a problem around the globe, not just with respect to Iran.  The fact of the matter is, is that Iran has not been able to establish credibly with the international community that, in fact, it is simply pursuing peaceful nuclear power.  There’s a reason why it’s subject to all these resolutions and violations identified by the United Nations.  That’s not something we made up.

There are a lot of other countries who have the technical capacity, but for some reason, they are able to get right with the international community.  Iran has not been able to do so.

Now, if in fact what the Supreme Leader has said is the case, which is that developing a nuclear weapon would be un-Islamic and that Iran has no interest in developing nuclear weapons, then there should be a practical, verifiable way to assure the international community that it’s not doing so.  And this problem will be solved — to the benefit of the region and to the benefit of the Iranian people.

The Iranian people are celebrating Nowruz, their most important holiday.  And every year I deliver a Nowruz message.  And I remind the people of Iran that they are a great civilization; they have an extraordinary history; they have unbelievable talent — they should be fully integrated then to the international community, where they can thrive and build businesses and expand commerce.  And there should be exchanges and travel and interactions with the Iranian people and everyone else, including the United States.  That should be the vision — not threats to raze Israeli cities to the ground.

Part of the frustration that I think we all feel sometimes is that it seems as if people spend all their time organizing around how they can gain advantage over other people, or inflict violence on other people, or isolate other people, instead of trying to figure out how do we solve problems.  This is a solvable problem — if, in fact, Iran is not pursuing a nuclear weapon.

And so we’re going to continue to apply the pressure that we have in a nonmilitary way to try to resolve the problem.  We will continue to try to pursue diplomatic solutions to the situation.
But, yes, I have said as President of the United States that I will maintain every option that’s available to prevent Iran from getting a nuclear weapon because I think the consequences for the region and for the world would be extraordinarily dangerous.

My hope and expectation is, is that, among a menu of options, the option that involves negotiations, discussions, compromise, and resolution of the problem is the one that’s exercised.  But as President of the United States, I would never take any option off the table.

Then KING ABDULLAH added:  There’s very little that I would like to add to what the President said.  I think, looking from the Jordanian point of view and the challenges that Jordan faces as we look around the region, the challenges of what the Israelis and the Palestinians that we faced in 2012, the instability as you’re seeing in Syria, we have the concerns as what’s happening in Iraq — any military action at the moment, whether Israeli or Iranian, to me at this stage is Pandora’s box, because nobody can guarantee what the outcome will be.

So hopefully there is another way of resolving this problem. At a time with so much instability in the Middle East, we just don’t need another thing on our shoulders.