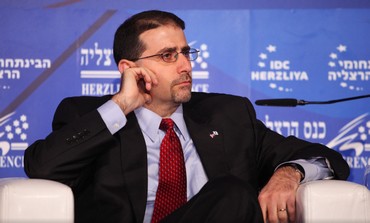 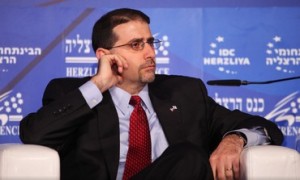 US Ambassador Dan Shapiro cautioned Wednesday against expecting US President Barack Obama to set a firm calendar deadline on Iran during his visit next week, saying there are numerous variables in play that are constantly in flux.

Shapiro, speaking on a panel at the Herzliya Conference discussing Obama’s upcoming visit, was responding to a Yediot Aharonot report claiming Obama would tell Israeli leaders that if it becomes clear by October that there is no chance for a diplomatic solution to the Iranian crisis, the US will seriously consider an attack on Iranian nuclear installations.

“The difficulty in trying to pin a date down is that it is subject to very many dynamic factors: What does the intelligence show about what is going on inside the program? What is the evolving impact the sanctions are having, both economically and politically inside Iran? What is happening in the talks?” Shapiro said. “All of these are in constant flux that requires literally daily dialogue at very high levels between our governments to make sure we are coordinated.”

Shapiro said that Israel and the US had a number of shared principles on Iran, and reiterated that the two countries shared a common understanding of the Iranian threat, a common intelligence picture and a common goal: prevention, not containment.

“The two leaders [Obama and Prime Minister Binyamin Netanyahu] should make absolutely sure that the Iranians understand that we have a commonalty of purpose and objectives,” he said.

Shapiro said he did not believe these were “massively different principles” between the US and Israel, and hinted that in closed discussions it was clear there is not that wide a gap between the two countries’ positions.

Another panelist, Dov Zakheim – a former undersecretary of defense in the Reagan administration – said that America’s “number one priority, apart from stopping the Iranians themselves, is stopping this country [Israel] from an attack.”

America and Israel’s timetables on Iran are “not entirely congruent,” he said.

“But the United States wants to be sure that if there is an attack, it is not something the United States has to then react to. In other words, we don’t want the tail wagging the dog. In all due respect to Israel, we are still the dog.”