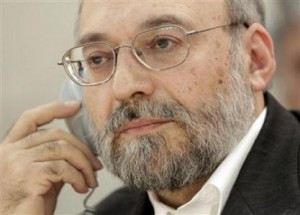 (Reuters) – An Iranian official has accused the United Nations special rapporteur on human rights in the Islamic Republic of receiving bribes from the United States, a news agency reported on Friday.

“The money that the special rapporteur has received from America’s foreign ministry (State Department) has prevented him from writing anything contrary to their wishes,” the Iranian Students’ News Agency (ISNA) quoted Mohammad Javad Larijani, secretary-general of the Iranian high council for human rights, as saying in a television program late on Thursday.

Shaheed, in Geneva to present his report to the United Nations on Monday, was not immediately available for comment.

In his report, Shaheed, who is barred from travelling to Iran, also said opposition leaders Mehdi Karoubi and Mirhossein Mousavi, who have been under house arrest for more than two years, were among hundreds of political prisoners held for exercising their right to freedom of expression during protests over alleged fraud in the re-election of President Mahmoud Ahmadinejad in 2009.

Following the mass street protests that erupted in Tehran and other Iranian cities after the disputed 2009 elections, authorities arrested dozens of journalists, bloggers and activists. Authorities have denied opposition charges that voting was rigged.

Shaheed, whose latest report was based on 169 interviews with people inside and outside the Islamic Republic, voiced alarm at the escalating rate of execution in Iran and the use of capital punishment for offences that do not meet international standards of what constitute the most serious crimes.

Murder, adultery, rape, armed robbery, drug trafficking and apostasy – the renouncing of Islam – are all punishable by death under Iran’s Islamic law practiced since the 1979 revolution.

Iran is often criticized by Western human rights groups for its high rate of executions. Tehran dismisses criticism of its justice system, saying it is implementing Islamic law and responding to a major drugs problem.