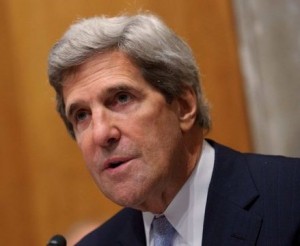 U.S. Secretary of State John Kerry on Wednesday made the same claim of Iran’s “elected” government that got Secretary of Defense Chuck Hagel in hot water with senators during last month’s confirmation hearing.

Many would argue Iran’s government is far from duly elected.

Mr. Kerry made the claim during Wednesday’s stop in France, as he stood beside French Foreign Minister Laurent Fabius, according to a report from Foreign Policy.

“Iran is a country with a government that was elected and that sits in the United Nations,” he said, according to Foreign Policy. “And it is important for us to deal with nation-states in a way that acts in the best interests of all of us in the world.”

As National Review reports, Mr. Hagel made the same claim in January, telling senators Iran was “an elected, legitimate government, whether we agree or not.”

Even Vice President Joseph R. Biden questions the legitimacy of Iran’s elected body. Foreign Policy reminds that Mr. Biden, on a Meet the Press appearance after the 2009 election of President Mahmoud Ahmadinejad, said “there’s some real doubt” about his win, and that “there’s an awful lot of questions about how this election was run.” And then-press secretary for the White House, Robert Gibbs, said, Foreign Policy reports: “I think there are a number of factors that give us some concern” about that election.

And in June 2009, according to Politico, Sen. John McCain called the Iranian elections a “sham,” at the same time pressing the White House to take action.

“It’s really a sham what they’ve pulled off, and I hope that we will act,” he said, according to the Politico report.

Mr. Kerry is under a limelight as he makes his first official overseas journey. He’s already committed a couple of diplomatic blunders — the first, on the eve of his trip, when he mixed up two existing nations to create a new country, Kyrzakhstan. And the second, during his stop in Germany, when he told a body of students that Americans have the “right to be stupid,” while making a point about the plusses of constitutional freedoms.