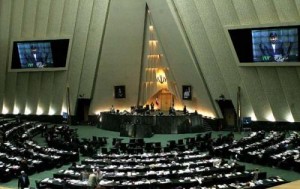 In a motion initiated by speaker of Parliament Ali Larijani, 265 Iranian MPs apologized to the country’s Supreme Leader Ayatollah Khamenei.

ISNA reports that at the end of Sunday’s session on February 17, 265 MPs announced that “for our part, we apologize for what occurred in the Islamic Parliament regarding the impeachment [of the labour minister].”

On February 3, President Mahmoud Ahmadinejad accompanied Labour Minister Abdolreza Sheikoleslami to his impeachment session in Parliament and, instead of addressing the issues around the impeachment, he began showing a video recording of Ali Larijani’s brother and accused his family of corruption and abuse of power.

Ali Larijani, the head of Parliament, responded to the attacks by throwing accusations back at Ahmadinejad and his family, calling on the president to leave the session.

Parliament proceeded to dismiss the labour minister, whom Ahmadinejad later appointed as his adviser in social affairs.

Yesterday, Iran’s Supreme Leader criticized the president for the first time; however, he added that the very motion to impeach the labour minister had not been appropriate.

Sheikoleslami was impeached for appointing Saeed Mortazavi to lead the Social Security Fund. Mortazavi is accused of being involved in the torture and death of detainees at Kahrizak Prison in 2009. Mortazavi is an Ahmadinejad ally, and his actions at Kahrizak are closely linked to his support for Ahmadinejad’s campaign for presidency.

Iran’s Supreme Leader has repeatedly called on the heads of the government branches to refrain from publicizing their disputes.

Following the scandalous parliamentary session, Ali Larijani was jeered and attacked in Qom by Ahmadinejad supporters as he was giving a speech in his riding.

Ali Motahari, a conservative member of Parliament, has said that despite Ayatollah Khamenei’s statement, he does not feel that the impeachment was an erroneous move.

He is quoted on Nasim-on-line as saying: “When the government is violating laws, Parliament cannot choose to remain silent just to give the appearance of accord.”

Motahari adds, however, that if the Supreme Leader had directed them to refrain from impeaching the minister, they would have done so.