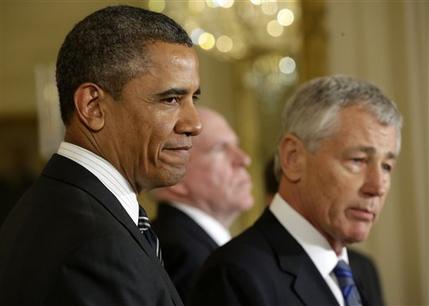 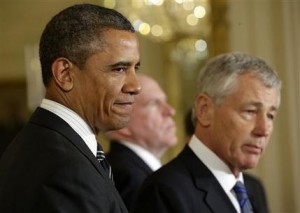 A newly surfaced video which was posted to YouTube on Sunday shows Chuck Hagel, President Barack Obama’s highly controversial defense secretary nomination, as having expressed more concern over Israel’s nuclear weapons than Iran’s and advocating that the U.S. engage with Iran and Syria.

The video was recorded during a 2008 event in which Hagel promoted his then-recently published book. The Weekly Standard reported on the video on Sunday.

In the video an audience member is shown asking Hagel, “[I]f Israel is attacked by Iran or an Iranian proxy like Hizbullah in a way that existentially threatens Israel,  almost to the extent that Israel was attacked in ’73 and it’s existentially threatened, would you support an American airstrike using U.S. forces, B2s, whatever on Iran?”

Hagel responds, “That’s a hypothetical question that somehow frames up the simplicity of the hypothetical question… But your question, I mean the complication of what’s going on there, Hamas is already attacking Israel. Iran supports Hamas. Iran supports Hizbullah. What I would much rather see is this administration, or hopefully the next administration, engage Iran, engage Syria. When I hear the talk about – well you can’t talk with Iran, you can’t talk with Syria and we’re, we should stay where we are and support Israel, and so on, well you miss the point.”

He then says, “We are not going to have peace, stability, security or even any hints of it in the Middle East until Iran and Syria and all the players are part of it.

“Now that doesn’t apologize for or doesn’t close our eyes to what Iran has been doing, what Iran does do, but unless they are engaged in some way , then I don’t see this getting any better, and then where this could go, where this could eventually go,” says Hagel.

“Someone was asking me the other day about a nuclear exchange in the world, where that would come from. I said well I’ll give you a scenario that’s very real. If Israel gets backed up enough into a corner and Israel uses a tactical theater nuclear weapon, you want to talk about seeing some things unravel in the world. The United States shouldn’t even be thinking about options of bombing Iran or anybody else. I mean we got our hands full right now. And we’re in such a hell of a mess,” he concludes.

The Senate Armed Services Committee last Thursday decided to postpone the expected panel vote on Hagel’s nomination after he refused to release additional requested financial information, including details regarding compensation for speeches he delivered since leaving Capitol Hill.

While Hagel has provided some information on his personal finances, he said he could not provide all of what has been requested because it was the property of private organizations that he was not authorized to disclose.

Astonishingly, however, senate sources told Breitbart News exclusively on Thursday that they have been informed that one of the reasons Hagel has refused to release the documents on his sources of foreign funding is that one of the names listed is a group purportedly called “Friends of Hamas.”

Last Wednesday 26 Republican senators sent a letter to the controversial nominee, asserting their opposition to the vote until he provided the requested information.