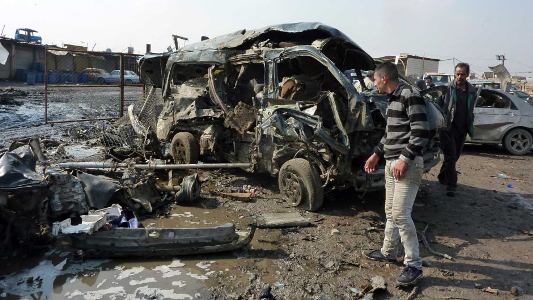 6 dead in rocket attack on Iranian exiles at refugee camp 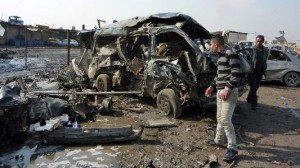 The camp, a former American military base known as Camp Liberty, houses members of the Mujahedeen-e-Khalq, the militant wing of an Iranian opposition group, the Paris-based National Council of Resistance of Iran.

Iraq’s Shiite-led pro-Iranian government is eager to have the Mujahedeen-e-Khalq, or MEK, out of the country.

The camp is meant to be a temporary way station while the United Nations works to resettle the residents abroad. They are unlikely to return to Iran because of their opposition to the regime.

Two police officials confirmed that six people were killed in Saturday’s attack and said more than 40 were hurt, including three Iraqi policemen. They spoke anonymously because they were not authorized to share information with the media.

The Iranian opposition group provided amateur video and photos it said showed the aftermath of the attack. One photo showed six bodies swaddled in blankets lying on the ground in a hallway. Amateur video showed wounded, some with blood-covered faces, being treated at a small clinic.

Kia, the camp spokesman, said Iraqi authorities refused to let the wounded be taken to area hospitals for treatment. Iraqi government officials were not immediately available for comment.

The U.N. envoy in Iraq, Martin Kobler, said he asked the Iraqi authorities to ensure medical care for the wounded. Kobler’s office said in a statement that Iraqi officials assured him the wounded were hospitalized.

Kobler also called for a speedy investigation of the attack.

Saturday’s rocket and mortar fire marked the first deadly attack since the refugee camp was set up at the beginning of 2012. Before being moved by the government to the Baghdad area, members of the MEK had lived in northeastern Iraq, near the Iranian border.

The group, which is also called the People’s Mujahedeen of Iran, opposes Iran’s clerical regime and carried out assassinations and bombings in Iran until renouncing violence in 2001.

It fought in the 1980s alongside Saddam Hussein’s forces in the Iran-Iraq war. Several thousand of its members were given sanctuary in Iraq by Saddam.

Iraq’s government considers the MEK a terrorist group and says its members are living in Iraq illegally.

The Obama administration took the MEK off the U.S. terrorism list in late September.