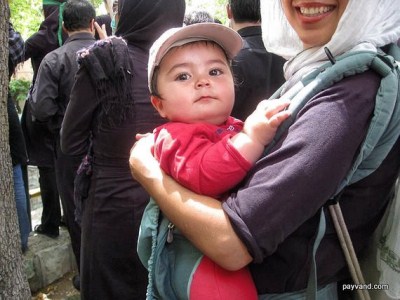 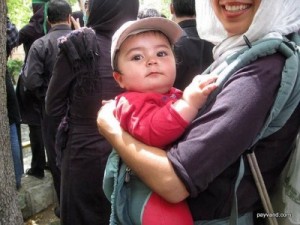 The birthrate is down amid economic instability caused by sanctions, leaving leaders worried the welfare system will be burdened and productivity diminished.

TEHRAN — Thirty-eight-year-old Reza Ali Mohammadi, a typist, and his wife, who stays at home, recently had their second son and wouldn’t mind having a larger family. But when he sees the price of Pampers at a grocery store, it knocks some sense into him. He can barely afford one package of diapers a week, the prices are so high.

Mohammadi represents a worrisome trend to the Iranian government: More young couples are wary of having babies in the climate of economic instability caused by international sanctions.

The disenchantment comes as the ruling Islamist clergy, alarmed by Iran’s meager population growth rate — estimated at 1% in 2011 by the United Nations — has mounted a campaign for families to have more children. Iran’s leaders fear the prospect of an aging population that would burden the welfare system and severely diminish productivity. Without a change, Iran’s median age is expected to rise from 27 to 40 by 2030.

“Another baby is a financial burden — the cost of midwifery, powdered milk and, later on, kindergarten,” said Mahnaz Mahjouri, a psychologist who counsels women. “The new values are to be a working wife, not a housewife and mother. Families cannot afford economically more than one child or maximum two, so the views about mothering are changing.”

Iranians like Mohammadi find themselves struggling with the daily cost of private school. Public schools, which also charge fees, have a bad reputation.

“A simple and primitive kindergarten charges you $150 for each child per month, while the average salary for a skilled worker is less than $500,” said Mohammadi, speaking from his Tehran office. “So how can I afford to have three children?”

The desire to migrate has also played a significant role in the lack of interest among young Iranians to have children — along with a turn away by women from conservative religious values as they seek equal footing with men.

“Men are more prone to have an individualistic lifestyle, and the migration trend is also strong,” said Naser Fakouhi, a male lecturer in sociology at several universities in Tehran. “Women want to catch up with men in social and economic activities, so they don’t listen to the government either.”

Ali, 32, is a case in point. The Tehran resident, who runs a print shop and asked that his full name not be published, said he and his wife saw children as a potential trap. “My wife prefers to go to English class since we want to immigrate to Australia rather than have her pregnant with a second child,” he said.

Ali’s parents and in-laws have put pressure on them, even though he is barely getting by. “No matter what our families say I will not have another child. I cannot afford it financially or mentally,” he said.

The government’s new family plan, which seeks to increase marriage and birth rates among those who are between 20 and 30 years old, offers a number of incentives to couples who choose to have larger families. Not only are they promised low interest rates on loans when they buy apartments, but working mothers are offered generous maternity leave, supposedly topped off with a gold coin after the birth.

The plan was unveiled in fall shortly after Iran’s supreme leader, Ayatollah Ali Khamenei, declared in a televised speech that the country’s 2-decade-old controlled-growth policy had to be halted and that the Islamic Republic should aim for a population of 150 million to 200 million to achieve greatness on the world stage. (The current population is about 75 million.) Some top government officials urged teenagers to marry and start having babies, and members of Iran’s powerful clergy were quick to jump on the bandwagon, hailing the new plan in sermons.

The plan represents a turnaround from the previous policy, which aimed to significantly reduce birthrates. That approach began more than two decades ago after Iran’s war with Iraq, when the Iranian government began worrying about a potential population explosion that could drain resources. The state encouraged families to have no more than two children and offered free vasectomies.

In a sign of the new thinking, the Health Ministry sent a note to hospitals in November saying there would be no more free vasectomies or tubal ligations, according to a report on Ghanoon Online, an Iranian news site considered close to the judiciary.

Critics say the move increases the risk of poor families ending up with unwanted children since they can’t afford to pay for sterilization or contraceptives. For those with money, there is the option of having a secret abortion.

A doctor at an underground clinic in Tehran that offers abortions — which are illegal in Iran — said as many as five of the procedures were carried out in his clinic each week. In the last five months, however, the number has risen. The obstetrician, who asked that his name not be published to avoid being arrested, charges between $150 and $300.

Even the rumor of a gold coin from the government for having a child has been met with doubt and ridicule for the government’s family planning proposal.

Mohammad Sharif, 47, who serves coffee in an insurance company in downtown Tehran, said the staff at a public health clinic thought he was joking when he showed up for his reward.

“It’s an empty promise,” he said with a sigh. “My fourth baby boy was born last week and I went to a clinic to get my coin. They laughed at me. There are no incentives whatsoever.”