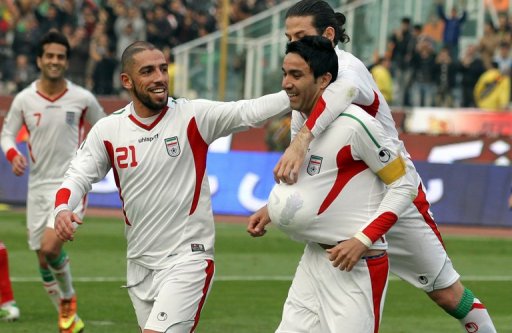 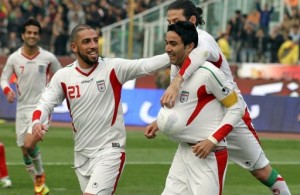 SINGAPORE — Javad Nekounam starred with a hat-trick as three-time champions Iran kick-started their 2015 Asian Cup qualifying campaign with a crushing 5-0 victory over Lebanon on Wednesday.

The ex-Osasuna man, now with Iran’s Esteghlal, slotted penalties either side of half-time and added the hosts’ fifth and final goal while Standard Liege striker Reza Ghoochannejhad weighed in with a brace at Tehran’s Azadi Stadium.

The rousing win made Iran early favourites to join Japan, host nation Australia and South Korea, who finished first, second and third in 2011, at the Asian Cup’s next edition in early 2015.

The top two teams from each of five qualifying groups go through, along with the best third-placed team, with Iran already well placed at the top of Group B.

Team Melli’s closest group rivals on the opening match day were Kuwait, who made Southeast Asian runners-up Thailand suffer in front of their own fans with a 3-1 victory in Bangkok.

An early own goal rocked Thailand, beaten in December’s AFF Suzuki Cup decider by Singapore, and second-half strikes by Hussain Fadhel and Hamad Aman put them virtually out of contention before Chanathip Songkrasin’s late consolation.

Earlier, the United Arab Emirates opened their campaign with a 2-1 win over battling Vietnam, and 10-man Hong Kong held Uzbekistan 0-0 in Tashkent.

The UAE got off the mark with an early penalty, put away by Al Ahli forward Ahmed Khalil, but Vietnam’s busy efforts to get back into the game paid off on the hour-mark when Huynh Quoc Anh made it all square.

However, Habib Fardan put the visitors back in front only seven minutes later and it was to prove decisive as UAE took an early lead in Group E and deflated the home fans at Hanoi’s My Dinh Stadium.

In the Uzbek capital, Hong Kong turned up with an injury-depleted squad and the outlook looked even bleaker for Kim Pan-Gon’s men when midfielder Lo Kwan Yee was sent off after 58 minutes.

But the visitors held firm against against the Uzbek attack to escape the difficult fixture with a precious point.