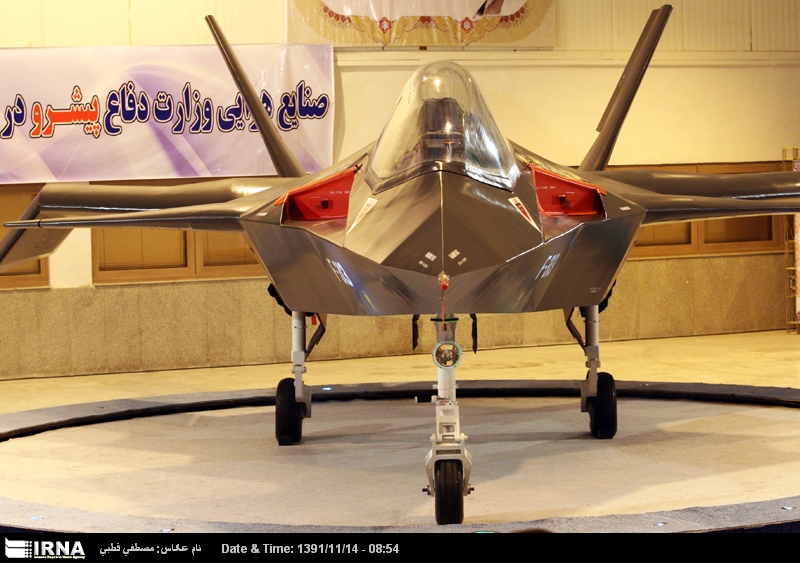 Ghaher-313: a detailed analysis, how and why?

Ghaher-313: a detailed analysis, how and why?

Iranian armed forces again shocked the world by revealing a new domestic warfare. Ghaher-313, codenamed F-313, was set to show on a rotating stage inside a commercial hanger in Islamic republic Iran Air Force (IRAF) Tactical Air Base No.1 (TAB.1) located in Mehrabad airport in Tehran. The unusual appearance of the aircraft set a blaze on aviation and military think tanks and forums to debate and understand the agenda behind revealing such weapon. But to do so, one need to know about background of Iranian aircraft industries.

Iranian ambition to develop domestically made fighter jets was initially developed in mid 80s when during a formal visit to one of IRIAF air bases, Ayatollah seyyed Ali Khamenei, Iran’s then president and incumbent supreme leader of the country ordered the base staff to start repairing more than 50 percent damaged F-5 fighter jets. Direct command of the supreme leader of the country indicates eagerness of Iranians to make indigenous fighter aircrafts, the reason behind which may be found at critical situation of IRIAF both in start and during the 8 year-long frustrating war with Iraq. During the war and losing support of united states significantly affected capabilities of IRIAF and although it had done some of most notorious air raid (like H3 ride) and some of most brave air interception missiles (like khark incident and 1 to 13 dogfight of an Iranian f-14) but especially in last year IRIAF was weakened and wasn’t the significant factor same as starting years of the war. 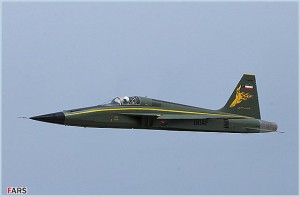 Iranian experience in building aircrafts started in 1985 by repairing a more than 50 percent damaged F-5E Tiger2. Reportedly first completely homemade F-5E was set to begin test flights in 1993 and the second aircraft started its test flights in 1996. The aircrafts named Azarakhsh and entered service inside F-5 squadrons early 2000s most probably located in Dezful air base.

In a parallel process, different parts of IRIAF started copying different aircrafts such as FT-33s and PC-6 trainer aircrafts under the names Parastoo and S.68 accordingly. The most interesting effort of Iranian aircraft industries is Tazarv trainer jet, which itself is a result of evolution of two initial models, Dorna and Tondar. Tazarv demonstrated capabilities of Iranians in producing subsystems and independently designing a new airframe. The jet reportedly used a J-85 engine, belonging to F-5s purchased from US as spare parts for Shah’s F-5 fleet. There was a crash report on one of latest models of Tazarv in preparation for a major parade. There is not any indication or observation reports form any of Tazarv or even Dorna or Tondar models since the crash. 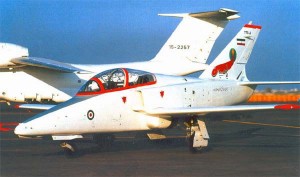 In early 2000 aircraft industries in Iran saw a major restructuring scene. HESA a company which originally established to assemble us Bell-214ST Isfahan and F-16s was instructed with gathering aircraft design and construction projects and establish construction lines in “Shahin Shahr” facility. However for unknown reason IRIAF continued to work on its projects and introduced Saeghe fighter jet several years later. Saeghe was a twin tail version of early F-5s. Meanwhile HESA participated in Russian M-ATF project introducing Shafaq light attacker jet. However none of introduced projects are believed to be reached to production line and entered service.

After years of evolution, at last Iranian SAHA industries (instructed with aircraft maintenance and apart from HEAS industries) revealed the Ghher-313 project. Judging from appearances, such as fiberglass plates in cockpit and plaxy glass canopy, the demonstrated model is a scaled mockup of the original plan. The footage of 1:10 scale model flying above an undesignated runway also indicates that no actual prototype is built yet. However, investigating the odd conceptual design of the demonstrated model reveals a lot about agenda behind Iranian fighter program, if there is any program.

The revealed model uses a tandem wing configuration, a set that hasn’t been observed in any advanced in-service fighter jet. However the tandem wing configuration enables F-313 to have a large wing area in a relatively small space such as any twin wing configuration interaction of wing tip vortices would be a major problem, lowering the performance and increasing vibration of the wings even resulting an failure in wing structure and braking rear wings. To overcome such peril, designers bended the rear wing’s tip, distancing rear wing tip vortices from front wing perturbations. Blended wings also are prone for increasing aircraft stability in roll axis especially in high altitudes the same as tandem wing- horizontal tail configuration for yaw axis. And stability is a quality that fighter interceptor jets such as F-15 or Su-27 don’t favor in the contrary; bombers such as F-111 or Su-24 seek more stability to do more accurate bombing rides. 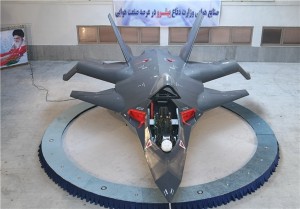 Nose of F-113 is also interesting, there is a relatively small nose (comparing with canopy size), lighter interceptor aircrafts especially modern 5th generation fighters need large sophisticated radars with lots of capabilities such as low probability of interception and jamming resistance capabilities, there for fighter jets usually have big noses to host big radars. But on the other hand bombers doesn’t need large and sophisticated radars but they relay mostly on optical targeting pods and data network for target acquisition.

Another important sign is small size air intakes which are located above the body. Is such configuration in severe maneuvers, separation of air flow from body would block entering air to engines and make the turbofan engine stall. However capability of performing severe maneuvers is crucial for evading missiles both in fighter jets and bombers but for aircrafts flying in high altitudes due to decrease in air density its almost impossible to perform high g maneuvers. Therefore they rely on high speed jamming, stand off attacks and stealth as their win cards. Up-intakes are also observable on F-117, B-2 and RQ-170 bombers and recon aircrafts. 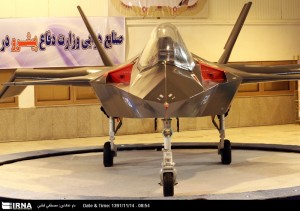 All signs indicate that F-313 is designed to perform attack or strike sorties in high altitudes using ECM and low RCS as its main threat evading tactics. The bomber would probably use stand-off weapons such as domestically made GBU-130 or GBU-15 Ghadr bombs and land attack versions of C-802 missile. Since US air force and its allies have tendency to defend their airspace by interceptors and have little attention in development of counter guided munitions systems such as pantsire.S1 F-313, at least on paper, would be a serious threat for western defense strategies.

However looking good on paper, the history of Iranian air craft industries remember a lot of good looking projects which faded away by the time passing lux revealing ceremonies. The story of Ghaher-313 shows a little difference with those in the past.