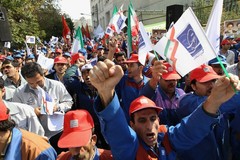 TEHRAN, Iran (AP) — About 1,000 Iranian workers have staged a protest rally in front of the South Korean Embassy in Tehran demanding the return of $70 million allegedly held by Seoul after a collapsed business deal.

Employees of Iran’s Entekhab Industrial Group claim South Korea has blocked a refund of the money after a failed bid in 2010 to buy Daewoo Electronics, a former subsidiary of the now-defunct Daewoo Group.

Iranians believe the deal was called off because of South Korean worries over mounting international sanctions against Iran over its nuclear program.

“Return our money,” the protesters shouted Sunday in the third such rally in recent months.