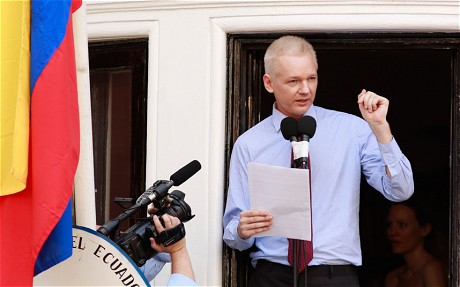 Julian Assange: Cumberbatch film is an attack on Wikileaks and Iran 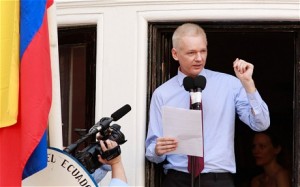 Julian Assange is in hiding in the Ecuadorian Embassy

WikiLeaks founder Julian Assange has condemned a Hollywood film about his organisation as a “massive propaganda attack” against the whistle-blowing website and the Iranian regime.

Delivering a speech to the Oxford Union from the Ecuadorian Embassy in London last night, he revealed he had acquired a script of the film, which stars British actor Benedict Cumberbatch.

Holding a copy of the script, he said the film, being released in the US in November, was also an attack on Iran.

Publicity photographs released earlier shows the actor as Assange in the movie, The Fifth Estate, which has now begun filming.

It traces the early days of the WikiLeaks site as he sought to bring confidential information into the public domain.

But Assange said Dreamworks was spending millions of dollars on the film, which he said was “fanning the flames” of war against Iran.

The British public should be concerned about the film because of the involvement of Cumberbatch, said Assange, who has been inside the embassy since last summer.

He has been granted political asylum as part of his campaign to avoid extradition to Sweden where he faces allegations of sex charges, which he denies.

Reading from the script, he said the opening scene was inside a military complex in Iran, with documents containing nuclear symbols.

The suggestion is that Iran is working on an atomic weapon, said Assange, adding: “How does this have anything to do with us? It is a lie upon lie. The movie is a massive propaganda attack on WikiLeaks and the character of my staff.”

He quotes from the script, saying scientists are seen meeting a US agent.

“How is it that a lie gets into a script about WikiLeaks?”

The film’s director Bill Condon said yesterday: “It may be decades before we understand the full impact of WikiLeaks and how its revolutionised the spread of information.

“So this film won’t claim any long view authority on its subject, or attempt any final judgment. We want to explore the complexities and challenges of transparency in the information age and, we hope, enliven and enrich the conversations WikiLeaks has already provoked.”

Assange spent over an hour talking to the union, which was celebrating whistleblowers.

A rumoured protest against Assange failed to materialise, with only supporters standing outside the building in Oxford where an awards ceremony was held.