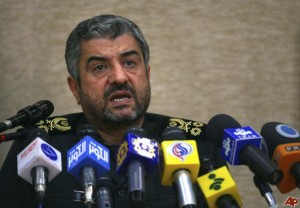 TEHRAN, Iran (AP) — The top commander of Iran’s powerful Revolutionary Guard insists his force controls shipping in the Strait of Hormuz, gateway for one fifth of the world’s oil.

Sanctions over Iran’s nuclear program have battered its economy and collapsed its currency. The West believes Iran might move to make nuclear weapons. Iran denies that.

Gen. Mohammad Ali Jafari said the Guard protects ships in the Gulf and the strait. His comments were posted on the Guard’s website Wednesday.

Guard commanders in the past have threatened to block the waterway over Western sanctions.

Jafari’s remarks were apparently aimed at highlighting the Guard’s control of the strategic waterway.

Military officials say Iran has a plan to shut the strait but insist that Supreme Leader Ayatollah Ali Khamenei would make the final decision.