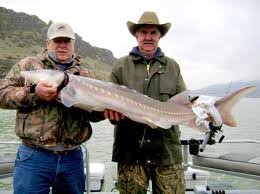 Iran has urged all the Caspian Sea states to be committed to save sturgeon reserves in the sea through stopping fishing up in large scale, IRNA quoted Ali-Asghar Mojahedi, an official with the Iranian Fishery Organization as saying.

By 2010, Iran was the leading Caspian Sea country in fishing up and exporting sturgeon in large scale, he noted.

According to him, Iran fished 800 tons of sturgeons in last solar year (ended on March 19, 2012) from Caspian sea, but for reproducing and breeding the sturgeons.

In 2010, the presidents of the Caspian Sea states inked an agreement to stop fishing up sturgeon in the sea for a period of five years, he added.

According to statistics, the five Caspian Sea states fished up 989 tons sturgeon and exported about 86 tons in 2010, the official said.

“Iran accounted for 41 percent of fishing up (403 tons) and 45 percent of exports (39 tons). Russia and Azerbaijan fished 268 tons and 84 tons of sturgeon respectively and exported 23 tons and 6 tons in order,” IRNA quoted him as saying.