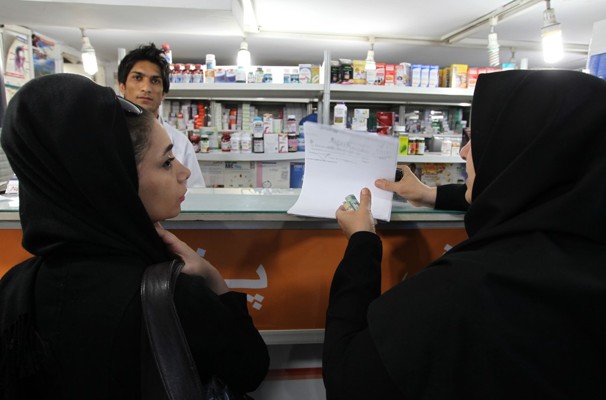 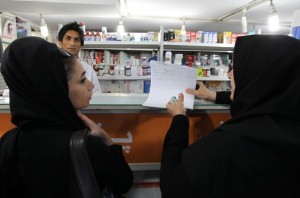 Amid strict Western sanctions and allegations of economic mismanagement, Iran is suffering a critical drug shortage. A growing number of Iranians in the US have taken it upon themselves to send medicine to their loved ones back home.

To keep her brother’s heart beating, this autumn an Iranian immigrant living in the US state of Georgia devised a smuggling operation worthy of a LeCarre novel.

Her 60-year-old brother Ibrahim, who lives in Tehran, takes Qualaquin, an anti-malaria drug, to keep his pacemaker functioning since his heart surgery.

But with the Iranian economy in shambles, the drug is no longer available in the country, says Sarah, his sister, who asked not to be identified by her real name to shield her family from the Iranian authorities.

“That medicine – they cannot find it in Iran,” she says. “He’s scared.”

So Sarah and Ibrahim’s other relatives in the US found a friendly doctor to write a prescription for a patient he had never examined – a violation of state medical regulations.

A family friend delivered the pills to Turkey and handed them off to another family friend, who carried them into Iran and to Ibrahim.

“That’s the only way I can take that medicine to my brother to give it to him before he dies,” she said.

“I want to scream. Why do they do this to people? At least let the people have the medicine. Who cares about Apple phone or this or that?”

Iran’s worsening shortage of critical medicine is the result of the country’s dire economic situation, which analysts say is caused by a combination of the ever-tightening Western sanctions against the Islamic Republic, as well as by economic missteps there.

The US state department is quick to point out that export of medicine and other humanitarian goods are specifically exempted from the measures intended to curb Iran’s nuclear ambitions, which the country says are solely peaceful but which Western powers suspect have military aims.

But the sanctions levied against Iranian banks, which are effectively cut off from the global financial system, have made it nigh impossible for Iranian companies to finance imports of whole drugs or raw ingredients, analysts say.

“There is not a proper channel through which they can pay, unless they send somebody to Pfizer with a suitcase full of cash,” says Muhammad Sahimi, an Iranian political analyst and engineering professor at the University of Southern California.

Sanctions against Iran’s oil industry have left the country short on foreign currency reserves. This week a prominent Iranian parliamentarian said oil revenues had declined 45% in the last nine months.

Iran’s currency, the Rial, is also believed to have lost 80% of its value against the dollar since the beginning of 2012, making imports prohibitively expensive.

Analysts in the US and Iran and political figures inside Iran have complained the government has spent needed cash on goods less pressing than medicine.

“The sanctions have accentuated the already existing bad situation that was due to corruption and mismanagement,” says Sahimi.

Last month, Iranian President Mahmoud Ahmadinejad sacked Health Minister Marziyeh Vahid Dastjerdi, the only woman minister in the history of the Islamic Republic. That step came a month after she angered the government by complaining publicly that foreign currency reserves were being spent on luxury items rather than on medicine.

“I have heard that luxury cars have been imported with subsidized dollars, but I don’t know what happened to the dollars that were supposed to be allocated for importing medicine,” she said on state television, weeks before she was sacked.

The US treasury department, which administers the US sanctions, says exports of medicine, medical devices and food “have been maintained at a steady level” in recent years.

“If there is in fact a shortage of some medicines in Iran, it is due to choices made by the Iranian government, not the US government,” spokesman John Sullivan said in a written statement.

As many as six million Iranian patients could be harmed by the drug shortage, Fatemeh Hashemi Rafsanjani, the head of Iran’s Charity Foundation for Special Diseases and daughter of former Iranian President Akbar Hashemi Rafsanjani, wrote in a letter to UN Secretary General Ban Ki-moon.

In a highly publicised case, a 15-year-old boy from a nomadic tribe in Iran’s south-western province of Khuzestan died in July of haemophilia because his family did not have access to medicine.

Amid the shortage, Iranians in need of the chemotherapy, cardiac, diabetes, haemophilia and other drugs have turned to the large Iranian diaspora for informal help.

About half a million people of Iranian descent live in the US, according to the US Census.

Most of them arrived since the political turmoil of the 1970s and 1980s and maintain close ties to family and friends living in Iran.

And six out of 10 Iranian Americans communicate with family and friends in Iran several times a month, according to a 2011 survey by the group.

Like many immigrant groups in the US and the UK, Iranian Americans have long been accustomed to bringing care packages to loved ones back in the homeland.

But the drug shortage has turned many Iranian Americans into ersatz pharmacists.

Majid, a Persian language teacher in the Washington DC area, bought bags of vitamins and dietary supplements from discount retailer Costco this autumn.

Then he arranged for a doctor friend to examine his mother, who was visiting from Iran, and to prescribe a large stock of blood thinner Warfarin to treat her heart disease, as well as a diabetes drug.

In November Majid’s mother returned to Iran with “baggage full of medicine”, he said.

But as Sepideh, a graduate student in the US state of Virginia, has found, residence in a land of relative plenty is no guarantee one can help those in need back home.

When Sepideh was in Tehran visiting family over the summer her mother’s supply of Gliclazide, a diabetes pill, became perilously low.

Sepideh went from one pharmacy to another across Tehran in search of a refill, but none had any in stock. The Iranian factory that produces Gliclazide had been unable to import raw ingredients from Europe, she was told.

Finally, she found a black market merchant who agreed to sell her mother a small supply for four times the market price – an untenable arrangement.

In the US, Sepideh has been unable to find a doctor to write a prescription for her mother sight unseen.

“She’s still OK, she’s still taking those pills,” say Sepideh. “But I don’t know what we’re going to do after.”