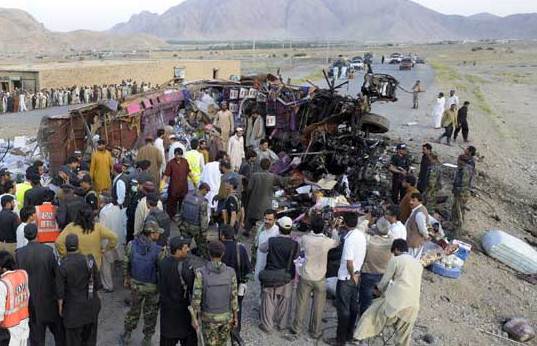 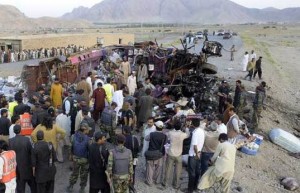 (Reuters) – A car bomb exploded on Sunday near a convoy of buses taking Pakistani Shia pilgrims to Iran, killing 20 people and wounding 24, officials said, the latest attack on the minority sect.

Witnesses said the blast occurred as the three buses were overtaking a car about 60 km (35 miles) west of Quetta, capital of sparsely populated Baluchistan province, site of many sectarian attacks, near the Iranian border.

“The bus next to us caught on fire immediately,” said pilgrim Hussein Ali, 60. “We tried to save our companions but were driven back by the intensity of the heat.”

An official at Mastung district hospital, said 20 people had been killed and 24 wounded.

Akbar Durrani, Baluchistan’s home secretary, said rescue teams were trying to reach victims in the wreckage of the vehicles, one of which was still in flames some time after the attack. He said the death toll could rise.

A string of attacks on Shias underscores the government’s inability to crack down on groups promoting sectarian violence.

In August, militants made passengers disembark from a bus in a northern province and shot 19 Shias dead after determining from their identity cards whether they were Shias or majority Sunnis.

New York-based Human Rights Watch has noted more than 320 Shias killed this year in Pakistan and said attacks were on the rise. It said the government’s failure to catch or prosecute attackers suggested it was “indifferent” to the killings.

Pakistan has banned several militant groups that openly call for attacks on Shias. But their leaders move around openly, give interviews and often receive police protection. Rights groups say some groups have ties to Pakistani security agencies.

Pakistan is overwhelmingly Muslim, with most citizens Sunni, though about 20 percent of its 180 million population are Shia.