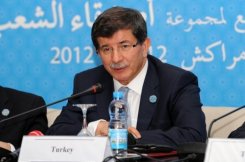 Iranian officials might have aimed to launch a campaign of misinformation among the Turkish public by abusing the issue of Patriot deployment in Turkish territory, Foreign Minister Ahmet Davutoğlu said in a televised interview Dec. 28.

Turkey warned Tehran over recent remarks by Iranian officials that were highly critical of Turkey because of NATO’s planned deployment of Patriots, he said. “Iranian side’s statements [on the Patriots] might have stemmed from two reasons. First one is a lack of information; but this cannot be the reason because we informed them. The second one is leading to misunderstandings among the Turkish public opinion by exploitation of such an issue. We warned our Iranian counterparts on this issue,” Davutoğlu said.

The minister once more reiterated that those systems would not pose a threat to Iran and they would leave the country after the security risk against Turkey disappeared. Planned deployment of Patriot missiles in Turkey is a “provocative” action which could bring about “uncalculated” results, Iran’s foreign minister said Dec. 16, soon after Iranian President Mahmoud Ahmedinejad canceled a visit to Turkey.

“The deployment of Patriot missiles will achieve nothing but to provoke and, God forbid, result in being forced into an uncalculated action,” Ali Akbar Salehi said in remarks reported by the official IRNA news agency.

“The West says military options against Iran on the table. We advise them not to attack us. We are ready to defend our soil,” the spokesman told a group of reporters in Istanbul at the Iranian Consulate. Davutoğlu also strictly dismissed allegations that NATO approved deployment of Patriot systems in return to Turkey’s easing of its blockade to Israel for partnership activities of the Alliance.
The Alliance has been in talks for the last two years to find a formula over the deadlock as some members of NATO blocked partnership activities with Egypt, Tunisia, Jordan and countries in the Balkans and Caucasus over Turkey’s veto on Israel, he said.

The main opposition Republican People’s Party (CHP) indicated Dec. 24 that U.S. pressure might be behind Turkey’s partial lift of its veto on Israel’s participation in NATO partnership programs. CHP Deputy Chair Faruk Loğoğlu, a former undersecretary of the Foreign Ministry, recalled that Israeli media had claimed Turkey’s partial lifting of its veto had come as Turkey’s request NATO station Patriot missile batteries along its border with Syria was granted.

“Patriots have noting to do with that,” Davutoğlu said, adding that the owners of that claim were manipulating [information] to cast a shadow on Turkey’s “diplomatic victory.”