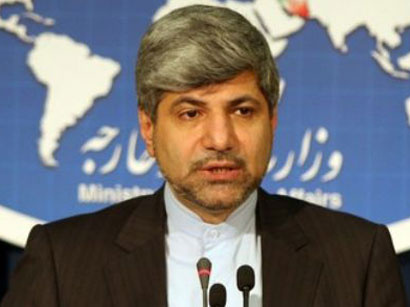 İdris Naim Şahin recently accused Iran in an interview with Today’s Zaman of sheltering members of the PKK in its territory while giving terrorists free rein to operate against Turkey from Iran.

Şahin explained in the interview that the PKK and its umbrella organization, the Kurdistan Communities’ Union (KCK), are using Iran as a base for sanctuary and as a site for transit, training and indoctrination, recruitment, fundraising and the supply of arms and munitions.

Mehmanparast told reporters in Trabzon on Thursday that Iran always stands by Turkey in its struggle against terrorism and that Turkish authorities are aware of this fact. The spokesman said both countries support each other to maintain security and there is cooperation between the two nations.

Turkey and Iran have been at odds over how to end the 21-month-old Syrian uprising and NATO’s decision to deploy Patriot missiles in Turkey’s territory. While Tehran has been the staunchest backer of the Bashar al-Assad regime, Turkey maintains that Assad must step down to make way for a democratic transition. Tehran has accused Turkey and Qatar of helping opposition forces fighting to topple Assad’s regime, a key Iranian ally.