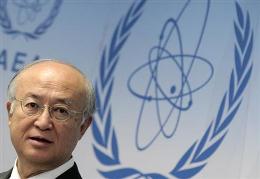 (Reuters) – Some progress is believed to have been made in Thursday’s talks between the U.N. nuclear agency and Iran in Tehran, a diplomatic source said on Friday.

The source, who declined to be identified because of the sensitivity of the discussions, said a new meeting between Iran and the U.N. International Atomic Energy Agency (IAEA) was expected to take place in mid-January.

The source gave no further details. There was no indication that the IAEA had gained access to the Parchin military site as requested. The IAEA team was expected back in Vienna, where the IAEA is based, on Friday morning.

The comments were in line with those made by Iran’s ambassador to the IAEA, Ali Asghar Soltanieh, to Iranian media after the one-day meeting in Tehran. Iranian media said a new meeting would take place in the capital on January 16.

The IAEA wants an agreement that would enable it to resume a long-stalled investigation into suspected atom bomb research in the Islamic state.

Iran, one of the world’s largest oil producers, denies Western allegations it is seeking to develop the means and technologies needed to assemble nuclear weapons. Its economy is struggling with the burden of increasingly tough Western sanctions.