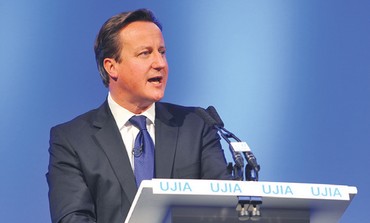 LONDON – British Prime Minister David Cameron on Tuesday urged Jerusalem not to resort to military action against Iran, “the clear and present danger facing Israel,” but said that “nothing was off the table.”

It was time for diplomacy and for Israel to allow more time for sanctions, Cameron said, speaking to a Conservative Friends of Israel (CFI) event in central London.

“I have said to Prime Minister [Binyamin] Netanyahu that now is the time for tough diplomacy, not for military action. Military action could have grave consequences for the region,” he said.

An Israeli attack would only give more fire power to the Iranian regime – “a cause to rally its people around, a foreign enemy to hate, and we cannot give that beleaguered regime more oxygen. Instead, we have got to give these sanctions time to work,” Cameron said.

“But let me be absolutely clear, if Iran makes the wrong choice – nothing – and I mean nothing – is off the table,” he told an audience of over 500 people, including diplomats, MPs, business leaders and community officials.

“Britain will work relentlessly to prevent a nuclear-armed Iran, not just for the sake of Israel, but for the peace and security of the world,” he said.

“Two-and-a-half years into my job as prime minister, it’s true that I’ve changed in some ways, but there is something that has absolutely, categorically not changed about me – and that is my commitment to Israel,” he said.

“I’m not an acquaintance of Israel. I’m not a colleague of Israel. I am a passionate friend of Israel – and that’s the way it’s going to stay,” the prime minister added.

The British government also announced the appointment of the first tech envoy to Israel to bolster trade, boost innovation and economic growth in both countries.

Cameron announced at the CFI event that Saul Klein, a partner in the international investment company Index Ventures, would be the UK’s tech envoy to Israel.

“We want to work much more closely with Israel on innovation and technology. That’s why a year ago we launched the UK-Israel tech hub to link up with UK Israel Business, the Israeli Embassy here in London and countless talented young people in both our countries,” the prime minister said.

Klein will promote the growing UK-Israel tech partnership between the Israel and the UK, working with the recently established UK Israel Tech Hub and UK Israel Tech Council. He will lead UK tech missions to Israel, bring Israeli start-ups to Britain and host tech events in both countries.

A successful businessman and venture capitalist, Klein has a track record in developing successful start-ups in both Britain and Israel.

“I have worked in tech in both the UK and Israel, and I know that there is a huge potential synergy between our two tech economies,” he said.

“Britain could get a huge economic boost by partnering up with Israeli tech. Israeli innovation could benefit from using Britain’s global reach, world-class companies, our scientific base, our capital markets and our business development expertise.

“It’s appropriate that our first ever tech envoy should be to the ‘Start-Up Nation,’ and I look forward to helping build the tech partnership that ought to exist between us,” Klein said.