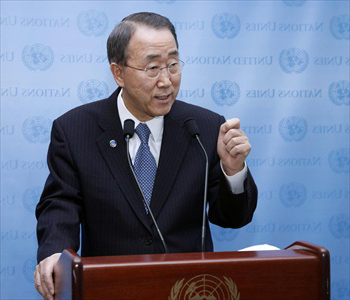 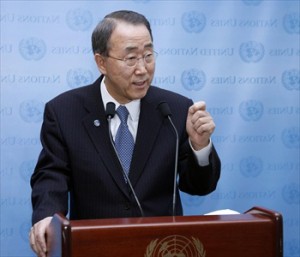 (Reuters) – U.N. chief Ban Ki-moon appealed on Thursday for countries to consider resettling several thousand Iranian dissidents living in Iraq who were recently moved to a former U.S. military base in Baghdad from a camp where they lived for decades.

In a report to the Security Council, Ban said 3,112 members of the People’s Mujahideen Organization of Iran have been transferred to Camp Hurriya, leaving about 100 still at Camp Ashraf – also know as Camp NewIraq – to help close it down.

Ashraf residents agreed in February to move to the new camp, where the United Nations intends to process them for refugee status in other countries, but they have complained that the conditions at the new base are poor and that they have not been permitted to bring many of their personal belongings.

The group is no longer welcome in Iraq under the Shi’ite Muslim-led government that came to power after U.S.-led forces invaded and toppled Saddam in 2003. Clashes between Ashraf residents and Iraqi security forces last year killed 34 people.

Ban said so far only 31 people had been accepted by other countries and that it was now a matter of urgency that they be offered resettlement opportunities in other countries.

“Without the strong commitment of member states to accept former residents of Camp New Iraq, no sustainable solution can be achieved,” Ban said in the report. “I appeal to member states to offer resettlement opportunities to residents with international protection needs as soon as possible.”

In September the U.S. State Department removed the dissident group from its official list of terrorist organizations but underscored serious concerns about the group which is seeking to recast itself as an Iranian opposition force.

The group calls for the overthrow of Iran’s clerical leaders and fought alongside Saddam’s forces in the Iran-Iraq war in the 1980s. It also led a guerrilla campaign against the U.S.-backed Shah of Iran in the 1970s, including attacks on U.S. targets.

The group surrendered weapons to U.S. forces after the 2003 invasion of Iraq and the fate of Ashraf’s residents has been in question since Iraqi authorities took over the camp from U.S. forces in 2009 under a bilateral security pact.