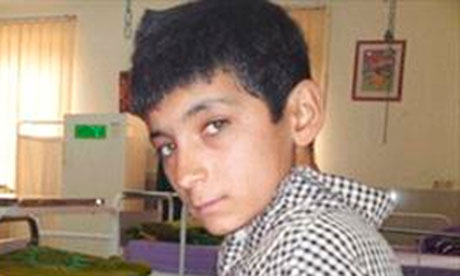 A teenage Iranian boy suffering from haemophilia has died due to a shortage of medicine in the country.

It is the first civilian death said to be directly linked to the impact that western economic sanctions are having on the Islamic republic.

Manouchehr Esmaili-Liousi was a 15-year-old from a nomadic tribe based in the mountains near the city of Dezful, in Iran‘s south-western province of Khuzestan.

He died in hospital after his family failed to find the vital medicine he desperately needed for his disease, Iran’s state news agencies reported on Wednesday.

The news was announced by Ahmad Ghavidel, the director of Iran’s haemophilia society.

He blamed Esmaili-Liousi’s death on the US and EU for their punitive measures against Tehran, which are also hitting imports of medicine and hospital equipment.

Although sanctions are not directly targeting Iranian pharmacies and medical sectors, measures imposed on Iranian banks and trade restrictions have made life extremely difficult for patients across the country, who are facing difficulties in finding medicines made outside Iran.

“This is against human rights … Even in wars, women and children and patients are protected by some impunity based on international treaties,” Ghavidel said, according to quotes carried by the state Irna news agency.

“But sanctions hitting medicine in Iran are causing a silent death and are a ploy to hurt the health of Iranian people.”

According to Ghavidel, 75% of the medicines for the treatment of haemophilia are made in the US and the EU, making Iranian patients heavily dependent on their imports.

He said haemophilia medicines available in Iranian markets had been reduced to a third of former supply levels.

“Because of sanctions, we’re extremely worried for the health of our patients suffering from haemophilia,” he said.

“We believe that these sanctions imposed on Iran by the US and the EU are taking the health of Iranian people hostage, especially in regards to children and women.

“If they really think that medicine is not blacklisted by sanctions, they should let the Iranian government know of the safe way to access them – or, on other hand, they should put an end to the measures against Iranian banks.”

In mid-October, a leading Iranian medical charity warned that a serious shortage of medicines caused by sanctions was putting millions of lives at risk.

Fatemeh Hashemi, head of Iran’s Charity Foundation for Special Diseases, said at the time that patients – especially those suffering from haemophilia, multiple sclerosis and cancer – are affected.

The charity foundation is a non-government organisation supporting six million patients in Iran.

“More than anything else, we have a lack of medicines for patients suffering from cancer and multiple sclerosis,” Hashemi told the conservative website Tabnak at the time.

“Those with thalassaemia or in need of dialysis are facing difficulties too – all because of sanctions against banks or problems with transferring foreign currency.”

Earlier this month, the New York Times published a detailed report on how sanctions were taking an unexpected toll on medical imports, including medicines such as Herceptin, which is made in the US.

Among other medicines said to be scarce in Iranian pharmacies is the tetanus vaccine.

Baby milk is another imported product affected. Iran produces its own powdered milk, which is abundant in the market, but cannot produce certain diet milk types or those suitable for children with allergies. These are imported from outside.

There have been instances of children hospitalised as a result of the milk shortages, but no reports of deaths as yet.

In recent weeks, Iranians have complained about the soaring price of baby milk, which has nearly doubled from 60,000 rials (£3) to almost 120,000 rials a tin.

Western sanctions targeting sectors from banking to trade and energy are aimed at forcing Iran’s leaders to comply with their international obligations on nuclear activities.

Tehran’s leaders have remained defiant against six UN security council resolutions calling on them to halt enrichment of uranium and have refused to co-operate fully with the International Atomic Energy Agency over their nuclear programme.

Opponents of sanctions say they are punishing ordinary Iranians rather than their rulers and have so far failed to achieve their primary goal.

A Foreign Office spokesman said on Wednesday: “Iran’s leaders are responsible and can make the choices which would bring sanctions to an end.

“But we would stress that the UK government has always been clear that financial sanctions against Iran are not intended to affect humanitarian goods and payments.

“This is why there are a number of exemptions within sanctions legislation to allow such transactions to take place.

“These exemptions have been protected in the new sanctions with such transactions only requiring prior authorisation if they are over €100,000.

“While it is the government’s policy not to encourage trade with Iran, Her Majesty’s Treasury does prioritise the licensing of transactions for humanitarian goods, including medicines and foodstuffs.”

Iran’s central bank, the only official channel for Iranians to transfer money abroad, is a major target of the sanctions.

Ordinary Iranians, including academics, therefore have no way of paying for services overseas – such as booking a hotel or subscribing to international journals.

Although foreign providers are not legally bound to refuse services to Iranians, they err on the safe side for fear of getting into trouble.

Many Iranian-Britons or Iranian-Americans living in the west have complained they have had their credit accounts closed even though they have no connection with the Iranian regime or, in some cases, when they are allied with the opposition.