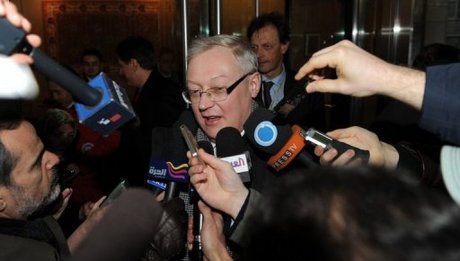 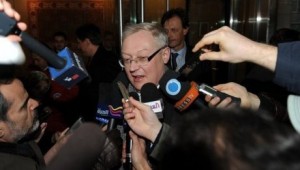 Ryabkov, who is also deputy foreign minister, was due to meet Saeed Jalili in his one-day visit, the Iranian agencies said without elaborating on the content or the aim of the visit.

His visit comes three days after he was quoted as telling The Financial Times that Moscow would support direct talks between Iran and the United States.

However, Iranian Foreign Minister Ali Akbar Salehi responded Monday by saying any “decision on comprehensive, bilateral political talks between the two countries… is up to the supreme leader,” Ayatollah Ali Khamenei.

Speculation about possible the direct U.S. talks surfaced after Iran, reeling from international sanctions over its nuclear program, found itself facing four more years with Barack Obama as U.S. president.

Iran has not ruled out direct talks with Washington but says these will not come overnight.

Salehi also expressed hope that negotiations on its nuclear program with the so-called P5+1 — the U.N. Security Council’s five permanent members plus Germany — would resume soon.

The P5+1 has for years sought through negotiations with Iran to defuse an international crisis over Tehran’s atomic ambitions, which the West believes has military aims despite repeated denials by the Islamic republic.

The last high-level talks, which all but failed, were held in Moscow in June.

According to Salehi, Jalili and EU foreign policy chief Catherine Ashton, who represents the world powers in the talks, are to hold a telephone conversation “to decide on a venue and date”.

The U.N. atomic watchdog has said it will hold a new round of talks in Tehran on December 13.

The Security Council has imposed four sets of sanctions on the Islamic regime, which coupled with unilateral Western restrictions on its oil sector and banks, have begun to cause major problems for its economy.