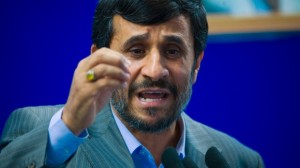 “Iran and Indonesia need to cooperate in seeking a strong relationship and to create a better future for the people in two countries,” Ahmadinejad said in Indonesia’s resort island of Bali Friday, as quoted by Indonesia’s state news agency.

Iran, an Islamic republic state suffering yearly extensive sanctions from the U.S. and other western countries, is seeking to open diplomatic space all over the world to combat its growing isolation.

Despite the tough pressure from International sanctions, Iran has maintained close relationship and developed strong economic ties with Indonesia after President Yudhoyono’s visit in January 2009.

Data shows the trade transactions between Iran and the Southeast Asia’s biggest economy in 2011 reached 1.856 billion U. S. dollars, surging 51 percent compared with the previous year.

President Yudhoyono was quoted as saying Friday that the relationship between Indonesia and Iran is going quite well until now, and the bilateral tie will be further enhanced in the future.

During a state visit to Indonesia at the beginning of this year, President Ahmadinejad said the development of bilateral relations between Jakarta and Tehran has no limit, adding that the two countries have deep relationships, especially in the religious, historical and social fields, local media reported.

As a moderate Muslim-majority country, Indonesia shares similar cultural backgrounds, which become a strong base for future relations between the two countries, according to analysts.