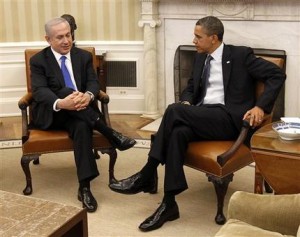 Ehud Barak’s assertion that Iran has “essentially delayed their arrival at the red line by eight months,” is in line with the timeframe laid out by Israeli Prime Minister Benjamin Netanyahu in September, when he spoke at the U.N. General Assembly. There, Netanyahu said the world has until next summer at the latest to stop Iran before it can build a nuclear bomb.

The West suspects Iran may be aiming toward production of nuclear weapons and has imposed a series of sanctions on the regime.

U.S. lawmakers are currently working on a set of new sanctions that could prevent Iran from doing business with most of the world until it agrees to internationally demanded constraints on its nuclear program.

Iran denies it is trying to build a bomb, insisting its program is for peaceful purposes. However, it has restricted access of U.N. inspectors to the country’s nuclear sites.

Officials from the U.N. nuclear watchdog – the International Atomic Energy Agency – said Friday they would meet with Iranian officials in Tehran next month in an attempt to restart stalled nuclear talks. It would be the first such meeting since early summer, when talks halted over Iran’s reluctance to allow IAEA into sites the agency suspects could have been used in secret work on nuclear weapons.

Israel sees Iran’s nuclear program as an existential threat, citing Iranian denials of the Holocaust, its calls for Israel’s destruction, its development of missiles capable of striking the Jewish state and its support for anti-Israel militant groups.

Barak’s comments, made during an interview late Thursday on Israel’s Channel 2 TV, appeared to be based on an August report by the IAEA. The report said that Iran has converted much of its higher-level enriched uranium into a powder for a medical research reactor that is difficult to reprocess for weapons production.

In the interview, Barak said Iran has not reached a “red line” on uranium enrichment, referring to Netanyahu’s speech in which the prime minister said Israel could not tolerate waiting until Iran progressed most of the way to the level of uranium enrichment needed to make an atomic bomb.

The IAEA report from August said Iran turned much of the uranium that was enriched to the higher, 20-percent levels into reactor fuel plates that are difficult to retool into warhead material.

As a result, it is still far short of the amount of more highly enriched uranium it would need to progress to weapons-grade levels.

The IAEA report also noted Iran has moved more of its uranium enrichment activities into fortified bunkers deep underground where they are impervious to air attack.

Barak said it was not clear why Iran stepped back from enriching uranium to higher levels.

“I don’t know why they did it. I don’t know if it was because of the deterrence that was connected to our statements and positions,” he said. “Maybe it comes from other considerations but that allowed for the delay until the spring or summer.”

Barak’s statements contrasted with a report on the same TV station this week that said Israel was on the brink of an attack against Iran in the past. The report said that Netanyahu and Barak ordered the military to go on high alert for a looming attack on Iran’s nuclear program two years ago. They backed off following strong objections from senior security officials, the TV report said.

Barak added Thursday that he doubted negotiations meant to persuade Iran to halt its nuclear program would be effective.

The international community has focused its efforts on diplomatic maneuvers to deter Iran from pursuing its nuclear program. Israel has been concerned that following President Barack Obama’s re-election, the United States may try to reach out for talks with Iran.

But on Thursday, in its first foreign policy announcement since the president’s re-election, the Obama administration targeted four Iranian officials and five organizations with sanctions for jamming satellite broadcasts and blocking Internet access for Iranian citizens.

Separately, the new sanctions the U.S. lawmakers are now working on would target everything from Iranian assets overseas to all foreign goods that the country imports. These measures would build on the tough sanctions package against Tehran’s oil industry that was pushed through earlier this year. Those measures already have cut Iran’s petroleum exports in half and hobbled its economy.

Yet even as the value of the country’s currency has dropped precipitously against the dollar in a year, sparking an economic depression and massive public discontent, Iran’s leadership has yet to bite on an offer from world powers for an easing of sanctions in exchange for several compromises over its nuclear program.