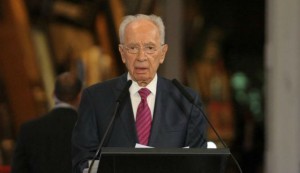 Israeli president, on visit to Moscow, urges Russian and American counterparts to ‘join hands to put an end to the dark terror and threats’.

President Shimon Peres on Thursday urged his Russian and American counterparts to “join hands to put an end to the dark terror and threats”, warning that Iran’s quest for a nuclear weapon “heralds another Holocaust”.

Speaking at the inaugurating ceremony for the Russian Jewish Museum and Tolerance Center in Moscow, Peres also declared that Israel must maintain peace with Jordan and Egypt and move urgently toward renewing negotiations with the Palestinians.

The basis for Israeli-Palestinian peace exists, Peres told participants at the ceremony. There must be two states for two nations, living in a good and neighborly way, he said.

This basis was acceptable to both sides and to the whole world, added Peres, and is both “necessary and possible”.

During his address, Peres heaped praise on Russian President Vladimir Putin, on Russian culture, and on the relationship between Russia and Jews “despite the ring of pogroms”.

He also lauded Russia for its role in fighting the Nazis, and even the Communists, “to fix the world, to free it from oppression, from systemic discrimination and wars of nationalism.”

Putin will host Peres later Thursday afternoon for a conversation expected to be focused on a number of diplomatic issues, including Israel’s opposition to Russia’s plan to sell advanced weaponry to Syria.