The Iranian ambassador to the United Nations has rejected the claims in the IAEA recent report on Iran’s nuclear program, saying they are “incredible” and based on “forged reports” provided by Israel and the United States. 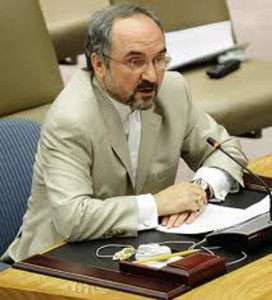 Iran’s U.N. Ambassador Mohammad Khazaei reiterated Iran’s position, that it has a right to develop nuclear energy for peaceful purposes and called on the IAEA to observe the principle of impartiality and professional conduct.

Khazaei criticized the ‘discriminatory, selective, restrictive and politically-motivated’ approach of the developed countries regarding nuclear cooperation.

“While a regime such as Israel has not joined the NPT (the nuclear Non-Proliferation Treaty) and has a program outside of nuclear safeguards, based on indisputable documents some Western powers like the US, Britain and France have helped the Zionist regime and this regime currently has one of the biggest nuclear arsenals in the world,” Khazaei elaborated.