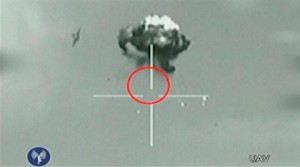 A drone launched into Israeli airspace earlier this month and pictures obtained from it are followed by widespread speculations.

It has been sent an unmanned aircraft into Israeli airspace on October 6 by Hezbollah.

In a televised speech, Hassan Nasrallah, the leader of the Lebanese militant group and political party Hezbollah said the drone, which was shot down by Israeli forces, had been designed in Iran and assembled by Hezbollah experts in Lebanon.

Speaking on Hezbollah’s Al-Manar television station, Nasrallah said that the drone flew undetected for hundreds of kilometers and surveilled strategic sites inside Israel, including the Dimona nuclear facility.

On October 29, an Iranian lawmaker said that UAV sent by Hezbollah transmitted pictures of restricted military, sensitive sites to Tehran.

The drone transmitted pictures of Israel’s “sensitive bases” before it was shot down, said Esmail Kowsari, chair of parliament’s defense committee, according to Iran’s Mehr news agency. He was speaking to Iran’s Arabic-language Al-Alam, Mehr reported on Monday.

It seems that the drone has been used to mark targets for Iran and Hezbollah’s missiles and rockets and it has also observed the place of U. S. forces, given the trajectory of the UAV has passed on Israel sensitive sites. Due to Israel recent measures, acquiring detailed information about Israeli targets, identifying and taking satellite images of them is possible only by launching such a drone.

Iran has claimed that Iranian-made surveillance drones have made dozens of apparently undetected flights into Israeli airspace from Lebanon in recent years.

While, Israel claimed that its air space is closely monitored by the military and, except for commercial air corridors, is restricted, with special attention paid to numerous military and security installations.

Now, It has been questioned the capability of two military systems in Israel by infiltrating the Ayub unmanned aircraft into its airspace. One of them is U.S. Radar Station in the Negev Desert and another one is Israel’s Iron Dome anti-missile defense system.

Moreover, Iran’s Defense Minister Ahmad Vahid said on Sunday that Tehran has drones far more advanced than the Ayub unmanned aircraft launched by Hezbollah, saying it was not the “latest Iranian technology, definitely, according to Mehr.

Iran routinely announces technological breakthroughs in its defense program. Last month it said to have started producing a long-range missile-carrying drone with a range of 2,000 kilometers (1,250 miles).

Apparently, the incursion by an unmanned aircraft into Israeli airspace was a harsh blow to Israel air defenses and it has led to a decline in Israeli public support for military strike against Iran.