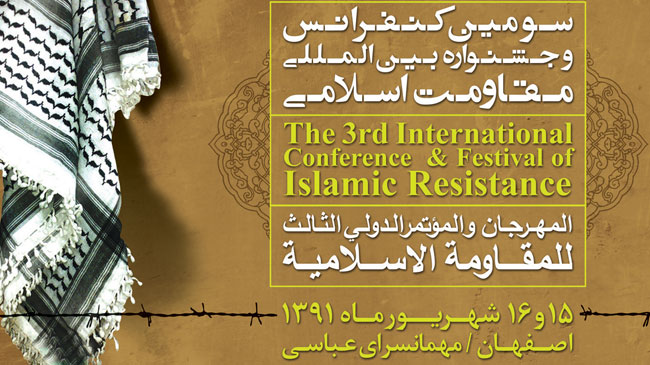 Iran on Wednesday held the third International Conference and Festival of Islamic Resistance, hosting representatives from the Hezbollah, Hamas and Islamic Jihad terror groups, according to the Financial Times

ISFAHAN, Iran — Often called one of the world’s most beautiful cities, Isfahan is famous for its elegant architecture and formal gardens. It is also the city that 500 years ago was pivotal in transforming Iran from a Sunni-dominated country to a Shiite one.

So it was the ideal backdrop for the government in Tehran to use as it hosts its “resistance” partners from the Palestinian territories and Lebanon this week to discuss how they will triumph over U.S. and Israeli threats to the Middle East, notably in Syria.

In a 300-year-old former caravansary, representatives from Lebanon’s Hezbollah and Amal movements, as well as Hamas and Islamic Jihad from the Palestinian territories, gathered Wednesday for the start of the third International Conference and Festival of Islamic Resistance, a two-day event.

In speeches in a conference hall covered in exquisite plasterwork, they recounted how resistance was key to the victory against Israel in Lebanon in 2006 and the 22-day siege of Gaza in 2008-09.

Their Iranian hosts made clear they believe it is Syria’s turn to resist the global threat they see now facing Damascus as “punishment for its support for Palestine.” Such resistance, however, is the responsibility of the government of President Bashar al-Assad, rather than militant groups or a popular movement, they said.

“Al-Qaeda, along with the U.S., Israel and Arab reactionaries, all intend to overthrow” Assad’s government, Ali-Akbar Velayati, senior adviser to Iran’s supreme leader, Ayatollah Ali Khamenei, told the conference. “It is because Syria is the golden link of the resistance chain against Israel.”

The conference is coordinated by the Sobhe Gharib cultural foundation, a nongovernmental organization that believes, in the words of one member, “we are nearing the dawn when all lands occupied by Israel will be freed.”

A special guest appearance was made by Sheik Ali Jaber, a white-turbaned, snowy-bearded member of Hezbollah’s central council, who read a message from the group’s leader, Hasan Nasrallah.

Nasrallah warned against “a new map” allegedly drawn by the West and Israel for the Middle East and stressed that “Islamic resistance is firm and . . . will last and continue its activities.”

The bond between Isfahan and Lebanese clerics dates to the 16th century, when Shah Abbas Safavid turned the city into a Shiite capital with the help of Lebanese Shiite clerics and began Iran’s transformation into a Shiite-dominated state.

Iran is now Hezbollah’s main supporter, and the Lebanese group is crucial to Tehran’s influence in the region.

Iranian analysts say that Tehran sees the crisis in Syria as an opportunity for the West to undermine Iran and its links to Hezbollah and to use it, along with the standoff over Iran’s nuclear program, to force change on the Islamic republic.

That, they say, has made the survival of Assad’s government a nonnegotiable issue for the Iranian government.

Hamed Hasan, Syria’s ambassador to Tehran, reiterated this message, telling the conference that “vicious plans” had been drafted by the United States and other Western states, as well as some countries in the region, to destroy the “bridge” that links “Iran to Hezbollah, Lebanon and Palestine.” He warned that the next step would be regime change in Tehran.

The Lebanese and Palestinian groups at the conference appeared less concerned with Syria or Iran than with their own struggles.

Khaled Qadomi of Hamas barely mentioned Syria and concentrated on the party’s battles with Israel in the Gaza Strip, adding that resistance movements were no longer “isolated” since they helped bring about the Arab Spring.

Abdulnaser Sharif, Islamic Jihad’s representative in Tehran, said only that while his movement had “differences” with the Syrian government, it would not describe it as an enemy.