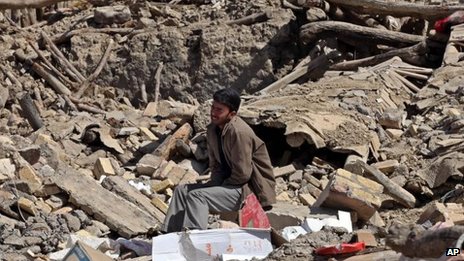 US allows NGOs to send money to quake-hit Iran

The United States has said it will temporarily lift sanctions for US-based non-governmental organisations that want to send financial aid to help Iran’s earthquake relief effort.

Until now US sanctions allowed food and medicines to be sent to Iran for humanitarian reasons, but not money.

Tehran has been criticised for responding slowly to the disaster.

The US Department of Treasury order comes after several US-Iranian non-governmental organisations (NGOs) pressed the White House to lift restrictions on sending money so that they could support charities on the ground.

The US has imposed heavy sanctions on Iran because of its nuclear programme, which Washington suspects is aimed at building a nuclear weapon.

Tehran has always denied these accusations, insisting that it is developing nuclear technology for civilian purposes such as energy production.

Current US sanctions on Iran are meant to target Iranian officials and institutions, particularly those that Washington regards as directly involved in Iran’s nuclear programme.

The earthquake, which destroyed six villages and injured some 3,000 people, is one of the worst to hit Iran since 2003, when an earthquake killed 25,000 in the city of Bam.

At that time President George W Bush allowed financial aid to be sent.

After this month’s earthquake, several US-Iranian aid organisations called on President Barack Obama to do the same.

“As pleased as we are with this, it also goes to remind us that the White House and EU sanctions are not meant to hit ordinary people but the government,” Trita Parsi, president of the NIAC said.

“But in practice it’s quite clear it’s not that simple and it’s the people who tend to get hit in such cases,” Mr Parsi added.

Tuesday’s ruling by the US Treasury will last for 45 days, until 5 October, and donors are limited to sending $300,000 each.

The ruling also states that, in line with existing sanctions, Iran’s Islamic Revolution Guards Corps (IRGC) are not allowed to receive any money from US-based NGOs.

The IRGC is a large military and political organisation which also has wide economic and commercial interests in Iran.

Mr Parsi said it was unlikely the IRGC would at any stage be in receipt of NGO money. He said a bigger concern was ensuring US banks complied with the ruling.

“US banks have tended to shy away from this, because it’s just not worth it, if they make one mistake they can get a horrific fine, it’s very important now that a strong signal is sent that they have to comply,” Mr Parsi said.