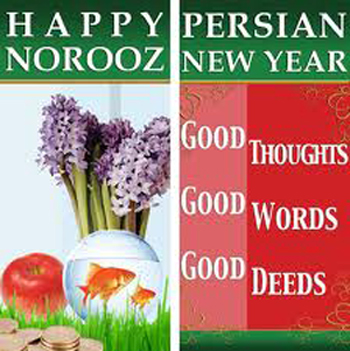 Nowruz rituals in Iran and other countries

Nowruz, which coincides with the first day of spring on the solar calendar , is celebrated by the people of the lands that once 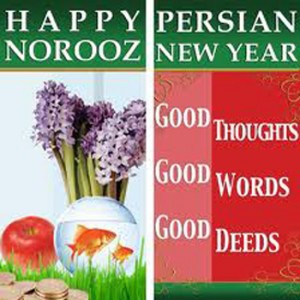 Nowruz, according to the Persian mythology, is believed to date back to about ten thousand BCE, when Shah Jamshid the Pisdadian king celebrated the first spring after the end of the last ice age. It goes back to the great Persian Empire.

Originally being a Zoroastrian festival, and the holiest of them all, Nowruz is one of the only scientifically precise New Year celebrated by over 300 million people worldwide on March 21.

The prelude to Nowruz is the Fire Festival (Chahar-Shanbeh Soori), which takes place before the New Year, at the last Wednesday of the old year. People jump over bonfires, with songs like “give me your beautiful red color, and take back my sickly pallor” which means I will give you my yellow color (sign of sickness), and you give me your fiery red color (sign of healthiness).

In preparation for Nowruz, people of Ex-Persian Empire carry out a thorough spring-cleaning (khaneh-tekani) and buy new clothes weeks before the New Year celebration. They also grow Sabzeh (wheat, barley, lentils) which is an essential part of getting ready for the New Year.

The other common Nowruz ritual in these countries is visiting relatives and friends, and paying respect to senior family members.

However, in different parts of the ancient Persian Empire, there are some different and unique rituals.

Traditionally on the night before the New Year, most Iranians will have Sabzi Polo Mahi, a special dish of rice cooked with fresh herbs and served with smoked and freshly fried fish.

On the 13th day of Holidays, which is called “Sizdah Bedar” (Nature Day), most Iranians go out on a picnic. Also in this day, people throw the Sabze away, they believe Sabze should not stay in the house after “Sizdah Bedar”. Iranians regard 13th day as a bad omen and believe that by going into the fields and parks they avoid misfortunes.

Moreover, in Iran and Afghanistan, Nowruz is celebrated for thirteen days but Nowruz holiday, in Tajikistan,  is five or six days.

During the Nowruz holiday various cultural activities, street festivities as well as horse racing and wrestling events are held across Tajikistan.

And, the main features of Nowruz in Pakistan are giving of colored eggs to friends and polo matches.

In Afghanistan, during the reign of the Taliban, Nowruz was banned and considered an “ancient pagan holiday centered on fire worship” but until 2001 it came back and now it is as popular as it was before the extremist Taliban.

Among various Nowruz traditions and customs in Afghanistan, the most important ones include Haft Mewa (Seven Fruits) which is made of seven 7 different dried fruits; Mela-e Gul-e Surkh festival which is an old festival celebrated only in Mazari Sharif during the first 40 days of the year when the Tulip flowers grow; and Jashni Dehqan (Festival of Farmers) which is celebrated in the first day of year.

Cooking Samanu (or samanak) is a Nowruz tradition in Iran, Afghanistan and Tajikistan. It is a special type of sweet dish made from Wheat germ. Women take a special party for it during the night, and cook it from late in the evening till the daylight, singing a special song.

The United Nations General Assembly recognized March 21st as the International Day of Nowrouz during its sixty-fourth session on Feb. 23, 2010. It also registered on the UNESCO List of the Intangible Cultural Heritage of Humanity.