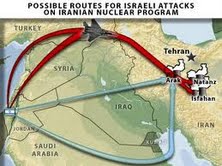 facilities, they will not notify the US.

Israeli officials said that if they eventually decide a strike is necessary, they would keep the Americans in the dark to decrease the likelihood that the U.S. would be held responsible for failing to stop Israel’s potential attack. The U.S. has been working with the Israelis for months to convince them that an attack would be only a temporary setback to Iran’s nuclear program, according to AP.

One US intelligence official said Israeli Prime Minister Benjamin Netanyahu and Defense Minister Ehud Barak told to a number of senior US officials visiting the country.

The United States, Israel and some of their allies accuse Tehran of pursuing military objectives in its nuclear energy program, using this pretext to impose sanctions against Iran and threaten the country with military attack.

Iran’s Defense Minister Brigadier General Ahmad Vahidi has also promised a crushing response to any possible aggression against the country.