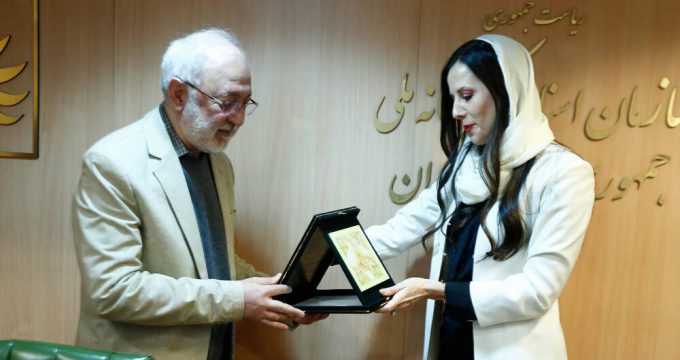 Tamara Vucic, the wife of Serbian President Aleksandar Vucic, visited the National Library and Archives of Iran (NLAI) on Saturday.

She was in Tehran to attend the First International Congress for Women of Influence organized last Friday, the NLAI announced.

Following her extended visit to different sections of the library, Vucic granted the library a collection of 32 books on Serbia, which were showcased in a special section.

In a meeting with NLAI director Alireza Mokhtarpur, she said, “This section features episodes in the history and culture of Serbia.”

Vucic said that she has been surprised by seeing a unique, tiny copy of the Holy Quran being preserved at the library, and added, “According to Islamic teachings, God has conveyed His messages to people by books and seeing the holy book gave me a great pleasure.”

“Today, people often satisfy their curiosity by searching on the Internet, but they never can find peace and serenity in that space. We should seek peace and tranquility in the world and we can search for the topics at libraries,” she asserted.

She also praised Iranians’ hospitality and said that the visit to the library raised her knowledge of Iranian culture and civilization.

Mokhtarpur thanked Vucic for granting the books to the library and hoped that signing a memorandum of understanding between the national libraries of Iran and Serbia would help improve cultural ties between the two countries.

Iran and Serbia enjoy a close cultural relationship. Serbia was selected as the special guest of the 31st Tehran International Book Fair in 2018.

In the head of a large high-level delegation, the then Serbian Culture and Information Minister, Vladan Vukosavljevic, visited Iran at that time.

In August 2018, the CEO of the Lazic Library in Serbia, Viktor Lazic, who is also heir to a long tradition of a family library that operated in Vojvodina from 1882 until 1977, was invited to deliver a speech about the library at the Malek National Library and Museum in Tehran.